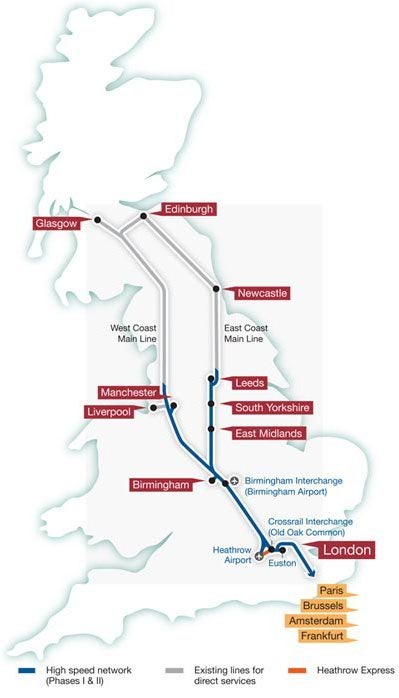 The UK Government is to again look at the £32bn 100-mile high-speed 2 (HS2) rail line between London and Birmingham, and may consider drilling a 1.5-mile tunnel under the Chiltern Hills.

The new tunnel could cost £500m and a decision on the project will be announced in mid-January next year.

The Department for Transport originally planned to announce a final decision on the route on 20 December, but wants to consider changes to designs amidst opposition to the original rail route.

The decision to look again at the route will allow for a feasibility study and a study of the environmental impact of the proposed route.

The new tunnel is expected to lower the HS2 line's environmental impact on the countryside, while minimising some deep cuttings along the route will meet the extra tunnelling expenses.

The plan has been welcomed by opponents, who noted the line will boost the economy of the West Midlands, the North West and Yorkshire.

The proposed high-speed railway project would run between London and Birmingham and will include a route running from the redesigned Euston station.

The high-speed rail project caused controversy due to cost and fears for the countryside, and a report in July by the UK's Camden Council noted the project would have a substantial negative impact on the borough.

Camden Council said the proposed expansion of Euston station would see a total of 216 Camden homes and about 20 business premises demolished.

The HS2 rail link, upon completion, aims to reduce the travel time between London and Birmingham to 49 minutes from the existing 1 hour 23 minutes.

The rail line will allow trains to run at a speed of 155mph, and the government expects that it will generate benefits of around £44bn for the UK economy.

The first phase of the rail project is planned to be operational by around 2026, followed by a link to Manchester and Leeds by 2032.

Caption: The proposed HS2 will also include a tunnel that is expected to minimise the environmental impact of the line on the countryside.