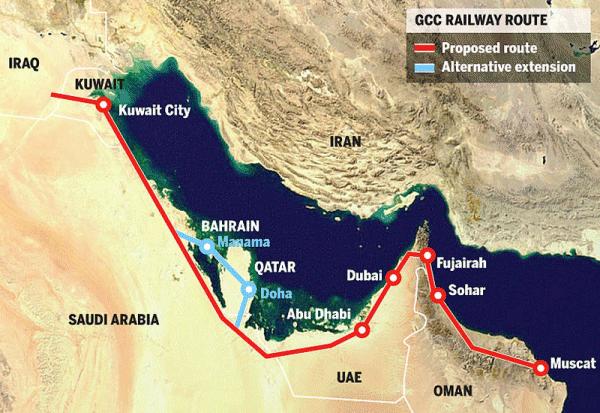 The Gulf Cooperation Council (GCC) countries are planning to spend Dh290bn ($79bn) between 2011 and 2020 in railway projects, including metros, trams, and stations, according to a new study by Kuwait-based investment bank, Kuwait Financial Centre or Markaz.

The investment includes $30bn on the pan-GCC rail network which will be shared among the member countries, includes one rail line spanning 1,970 km connecting all GCC countries and Qatar with a bridge.

The second line will span 1,984km through Kuwait, Saudi Arabia and the UAE, and end in Oman and after the completion of the entire line built to provide an alternative travel link through GCC countries which is currently linked by road or air.

About $3.1bn is estimated to be spent on land acquisition for the project, while the cost of purchasing new trains and locomotives is estimated at $1.8bn.

Starting from Kuwait, the rail line will connect the eastern Saudi Arabia city of Dammam and Bahrain through a bridge, which runs parallel to the King Fahd Causeway, before reaching Qatar via Salwa.

The UAE and Saudi Arabia will be linked through another line that will run through Bathaa.

The railway line will also run through Abu Dhabi and Al Ain to reach Oman through Sahar and Muscat, while Qatar and Bahrain will be connected by a bridge.

Construction on the GCC rail network will begin in 2012 following the engineering studies.

With the completion of rail network, GCC will plan to connect the rail network with rail lines of Jordan, Syria and Turkey.

Previously, a research report by Ventures Middle East said that the GCC countries are investing about $106.2bn in railway projects.

Saudi Arabia tops the list among the GCC countries, with 23 projects worth $25.6bn, including the $6bn Makkah-Madina Railway Link.

The UAE has implemented eight railway projects worth $20.6bn, which are underway, including the construction of the $11bn Emirates Railway Project, scheduled to begin in mid-2011.