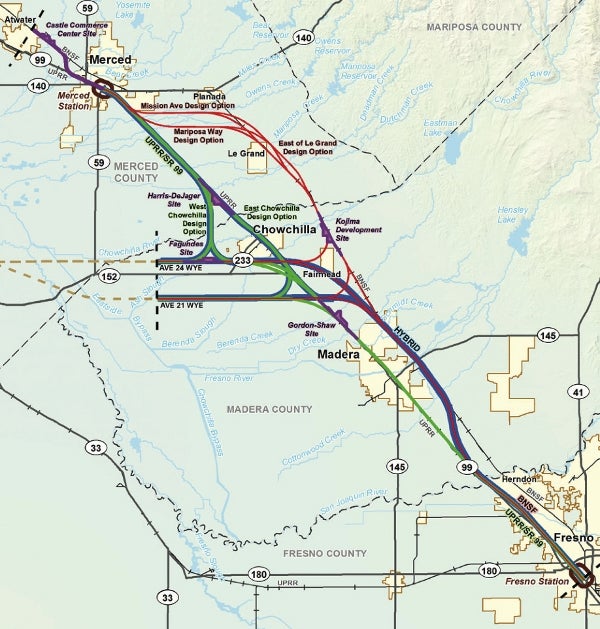 The California High-Speed Rail Authority in the US has recommended a preferred route for the Merced to Fresno section of the state's 800-mile high-speed train system.

The hybrid alternative parallels the Union Pacific railroad tracks and State Route 99 between Merced and Fresno.

California High-Speed Rail Authority deputy director of planning Dan Leavitt said not only does this hybrid route have the fewest overall impacts, but it is also financially sensible, saving hundreds of millions compared with the other two routes.

Engineers estimated that the Hybrid Alternative route will cost $1bn less than building the line along Union Pacific Railroad / State Route 99, and $500m less than the BNSF route.

The authority board will take an action on this recommendation at its 13 December meeting in Merced this year.

The Authority has recommended that this route be identified as the preferred alternative in the Final EIR/EIS, which is now being prepared and scheduled for release in early 2012.

The southernmost 24 miles along the hybrid alternative, from Ave 17 in Madera County through the city of Fresno to the downtown station, will be the first construction area included in the 130-mile initial construction segment.

The Authority is developing a San Francisco Bay to Los Angeles and Anaheim high-speed rail system that will operate at speeds of up to 220mph.

The entire train system will connect with all the major urban centres, including Sacramento and San Diego, and initial infrastructure construction will commence in the Central Valley in 2012.

Caption: The entire 65-mile hybrid alternative route parallels the Union Pacific railroad tracks and State Route 99, and is estimated to cost less than the BNSF route.

Stadler to deliver up to 80 Tramlink trams to Milan