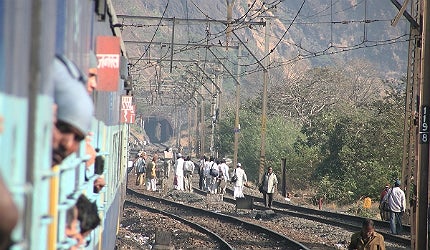 India’s 64,000km rail system, the fourth largest in the world, transports more than ten billion passengers and 1,050 million tons of freight every year. But the network is perhaps best known for its capacity and safety issues, which make it one of the most dangerous globally.

The Indian Government has been striving to tackle the problem and has injected billions of dollars into new projects and tracks. In its March 2012 railway budget, it pledged to invest $147bn into major projects during the next five years, in an effort to finally catch up with its neighbouring nations.

The main focus of the investment to 2017 is on improving tracks, bridges, signalling, rolling stock and stations throughout the country. In addition, 700km of new railway tracks are to be added to the network to link some of India’s more remote regions with the rest of the country, making it one of the biggest investments in India’s long history of railway transport.

One goal: the nation’s biggest rail projects to 2017

"The Indian Government has been striving to tackle the problem and has injected billions of dollars into new projects and tracks."

In the next five years, India will set the whole railway industry towards one goal: better, bigger, faster and safer rail links which cater to the needs of the country’s prospering middle class. In an effort to gain more economic and geographical mobility, the government is planning to spend vast amounts of money to overhaul its creaky network.

In total, it has sanctioned ten new electrification projects and 17 new gauge conversion projects in its Railway Budget 2012-2013 alone. In addition to the hundreds of kilometres of new tracks, it will also upgrade stations and add a number of new express and passenger trains.

One of the biggest expansion projects currently under construction is the Kashmir railway, officially called the Jammu-Udhampur-Katra-Qazigund-Baramulla link (JUSBRL). At the beginning of 2012, the government announced a cash injection of $3.5bn, with which the originally estimated cost of $13bn will most likely be exceeded. The project, which is due for completion in 2017, already received National Project Status in 2002 but has encountered substantial engineering challenges over the years, in particular through the Pir Panjal mountains area, where an 11km tunnelling section took more than six years to complete.

A massive part of India’s railway investment goes into its densely populated cities, in particular the capital New Delhi. The approval of a new $327 monorail extension to the overcrowded Delhi Metro was announced in January 2012. The new line will have 12 stations and interchanges with three existing metro lines and is expected to come online by 2017, serving about 150,000 passengers a day.

In Mumbai on the other hand, the Mumbai Metropolitan Region Development Authority (MMRDA) set aside $244m out of the $1bn yearly budget for the development of the metro rail and monorail, with $176m going into a new monorail project. Apart from that, the authority has also decided to invest $58m for the Mumbai Urban Transport Project-II (MUTP-II) for the improvement of the suburban rail system.

Another major mass rapid transit system is being constructed for the city of Hyderabad, scheduled to become operational in 2017. At the beginning of May 2012, officials announced that the first phase is likely to be completed in three years time.

It is one of the world’s largest public private partnership (PPP) projects in the metro sector, involving 71.16km of elevated metro rail lines in three corridors, with 65 stations criss-crossing throughout the capital of the state of Andhra Pradesh.

The Indian Government has most definitely realised the need to upgrade its railway network to bring it in line with its neighbouring countries. But the officials also know that track connection with countries such as Bangladesh, Pakistan, Nepal and China will be vital.

"Commenting on his decision, Trivedi said: "I’m worried about safety. I did what I did because of safety.""

In April 2012, Indian Railways therefore announced that it will take part in the 80,900km Trans-Asian Railway Network (TARN), which soon could connect 28 countries between Europe and south-east Asia. For India, taking part in the project is essential for its strategic development and will boost economic activities in the years ahead.

Indian Railways will initially invest $580m to link about 97km of new rail connections between Jiribam and Tupul (Manipur) in the first phase of the project.

The entire project, which is being considered by the United Nations Economics and Social Commission for Asia and the Pacific (UNESCAP) under the Asian Land Infrastructure Development Project, is expected to be completed by 2025.

The importance of building transnational links with other countries was also highlighted by former Railway Minister Dinesh Trivedi during his budget announcement on 14 March 2012, claiming that this approach will significantly develop relations with neighbouring countries to "improve bilateral ties" and help to establish connectivity with inaccessible areas.

But while India has shown the hunger to implement even the most ambitious railway projects, its authorities sometimes fail to mirror this in their approach to rail investments from private and foreign investments. Currently, public-private partnerships only represent four percent of investments in India’s railway sector, even though the industry has demanded clear guidelines to attract private investments for many years.

"Improved project implementation, streamlined and time-bound approval processes, providing terms in projects that will allow investors to gain ‘reasonable’ returns on capital, and more efficient vendor management are some of the areas that can be addressed by the Indian Railways to ensure the growth and sustainability of the sector," said Confederation of Indian Industry (CII) director general Chandrajit Banerjee just days before the budget announcement in March.

Opening up the sector for private investment however requires a new mindset from India’s politicians. But until now, railway is still treated as the crowd-pleasing, super-cheap state transport, as some experts believe.

"There is a lot of scope to come in and a huge amount of investment can come in from the private sector but the railways have to open up. Till now the Indian railways had been very closed," Hermant Kanoria, Kolkata-based Srei Infrastructure chairman and managing director, told news agency Reuters in March, pointing out the much-needed change in the sector

"In April 2012, Indian Railways therefore announced that it will take part in the 80,900km Trans-Asian Railway Network (TARN), which soon could connect 28 countries between Europe and south-east Asia."

Perhaps the biggest problem has however been highlighted by the resignation of Railway Minister Dinesh Trivedi, only days after his budget announcement in mid-March. In his budget speech, he pledged to increase passenger rail fares for the first time in eight years in a move to improve network efficiency and safety. His party however protested against the decision, forcing him to quit and make way for Mukul Roy.

Commenting on his decision, Trivedi said: "I’m worried about safety. I did what I did because of safety." All this came on the back of the publication of a report by a government-appointed panel that reviewed the country’s railway safety after some major accidents in recent years.

The results were shocking: every year, around 15,000 people die somewhere along India’s extensive rail tracks, usually slum-dwellers and poor villagers who live near the lines or passengers who fall off overcrowded commuter trains. Mumbai’s suburban rail network alone accounts for as many as 6,000 deaths a year.

The panel said that although these deaths are not from train collisions, they cannot be ignored by railway authorities and called on the government to invest $20bn over the next five years to upgrade technology and infrastructure. This should include safe coaches, anti-collision devices, advance warning systems and the strengthening of ageing tracks and rail bridges.

Indian Institute of Management professor and transport and infrastructure expert G Raghuram, a member of the panel, suggested several measures to address the issue: "There are various solutions possible – better fencing, more opportunities to cross the tracks through overpass bridges. In suburban areas, at least, there is no reason why Indian Railways cannot just floodlight the entire railway track," he said.

He added that modernising the network will also help reduce train accidents. "In terms of international benching, and given the technologies and systems that are available, the Indian railways can do a lot more (…) Railways have just to move, take a quantum jump in terms of the systems and technologies they need to adopt."

However, without real governmental support to even impose the simplest safety measures, improving some of these death traps still seems a long way off. Trivedi most definitely has paid a high price. It also shows that without the right political environment even the biggest railway investments seem to be money thrown down the drain.