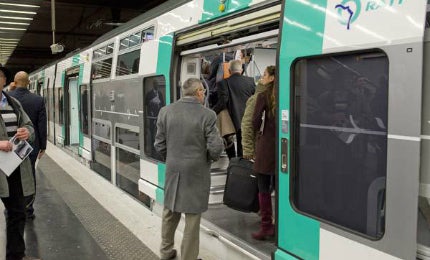 MI09 is a five-car, double-decker commuter train operating on the RER A line in Paris, the busiest regional line in Europe. The 100th train in the series was delivered in July 2015, and 40 more trains are expected to be delivered before the end of 2017.

The duplex train is owned and operated by Transport Syndicate of the Ile de France (STIF) and Régie Autonome des Transports Parisiens (RATP), while the manufacturer is the Alstom-Bombardier consortium.

The MI09 trains have replaced the MI84 single-decker trains on the RER A line, while the replacement of the MS61 trains is in progress. The new train can accommodate approximately 50% more passengers than the MI84, and 40% more than the MS61, besides reducing energy consumption by 55% compared to the MS61, and by 31% compared to the MI84.

Réseau Express Régional, or RER, is a Regional Express Network rapid transit system serving the capital city of Paris and its suburbs in France. It is a combination of a modern metropolis centre underground railway and set of commuter rail lines.

The RER A line is 109km-long, with 46 stations situated along the East-West route, catering to approximately 1.14m passengers a day. The first MI09 train started operations in December 2011 and, as of July 2015, the existing MI09 trains on the line have covered more than 24 million kilometres.

The train is designed based on the MI2N trains, which were delivered by the same Alstom-Bombardier consortium for the RER A line between 1990 and 2000.

The double-decker train is 112m-long and 2.9m-wide, and each car features three 2m-wide doors on each side, providing easy movement.

Two five-car MI09 trains can also be configured into a single 10-car trainset to meet the needs of the peak seasons.

The seats are given a floral and plant-like theme, and the new porthole-shaped innovative lights combine to create a serene ambience within the train. The seats are provided with accessible support bars, the entry platforms are designed to offer greater transparency, and the interior arrangement allows for a full view of both the upper and lower decks.

The train has an operational speed of 49km / h and can reach a maximum speed of 120km / h.

Accommodation in the RER A line trains

Each train has a capacity to accommodate 2,600 seated and standing passengers. The floors of the trainsets are designed to be even with the platforms. The train features 34 dedicated seats for persons with reduced mobility, and two areas for wheelchair users.

Each car of the train is constructed using more than 30t of steel and 30km of cables, in addition to insulating materials, composite materials and electronic equipment.

Bombardier manufactures the three middle cars of each trainset at its Crespin site, while the end cars are assembled by Alstom at its Valenciennes Petite-Forêt site.

"Each train has a capacity to accommodate 2,600 seated and standing passengers."

"Each train is equipped with a sound and visual information system, including two LCD screens placed in each of the upper and lower decks."

MBD Design performed the interior design works for the train. The installation of the secondary doors, fireproof and soundproof cabin partition, the lightings and electronics, the roofstrips, and the interior fittings were performed by Barat Group.