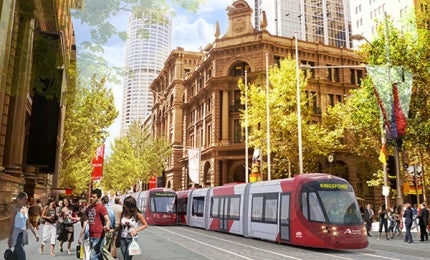 In October 2014, the New South Wales (NSW) government finalised four potential routes covering Macquarie Park and Strathfield in the east, Rouse Hill in the north-west, Bankstown and Liverpool in the south, as well as Wetherill Park and Blacktown in the west.

The preferred routes for the proposed light rail network are from Parramatta to Macquarie Park through Carlingford, to Castle Hill via Old Northern Road, to Bankstown, and to Sydney Olympic Park and Strathfield / Burwood. The engineering, transport planning and customer analysis on the selected corridors will be conducted by NSW to select the best option for light rail in the region.

The NSW government’s transport infrastructure budget for 2014-2015 has dedicated $400m from its major infrastructure fund, Restart NSW, for the construction of the light rail system.

Parramatta City Council has identified potential stops and route plan for sections from Parramatta to Macquarie Park and Parramatta-Castle Hill.

The total investment on the Western Sydney Light Rail project is estimated to be $1.7bn. The total cost of the Macquarie Park line is estimated to be $900m, while the Castle Hill line will cost about $800m. More than $32m will be spent annually to maintain smooth operations of the rail links, which will serve more than 5,000 passengers a corridor during peak hours.

The rail network will be further extended to meet the future economic and social needs of the region.

The first stage of the light rail project will be 23.7km long and will include up to 25 stations along the route.

The 12km-long CSELR project in Sydney, Australia, will extend from Circular Quay via the Central Station.

The section running from Parramatta to Castle Hill Line will link Castle Hill, Windsor Road, to Baulkham Hills town centre, Parramatta CBD, and Rydalmere. Castle Hill is considered the gateway to Sydney’s growing north-west. The line will ease congestion of the Windsor road corridor, as well as provide an interchange to the North West Rail Link.

Future stages will include the Parramatta-Bankstown alignment and Parramatta to Rhodes section through Sydney Olympic Park. The Bankstown line will connect Granville, Chester Hill and Bankstown significantly increasing connectivity to provide education and employment opportunities.

The Rhodes line will provide access to recreational and cultural facilities such as Sydney Olympic Park. It will also provide employment opportunities to the fast-growing suburb of Rhodes.

The proposed light rail project is expected to generate more than $5bn in construction activity, creating approximately 2,500 jobs across the region. It will employ 170 people for operations and maintenance and other related activities.

The network will also provide the residents of Western Sydney with access to better jobs, education and services along its 24km corridor.

Brenner Base Rail Tunnel
Topics in this article: