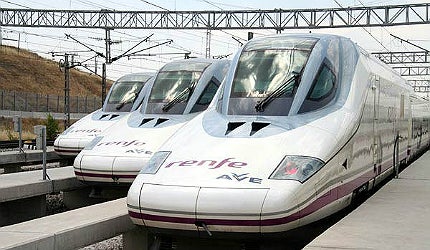 Talgo 350 (T350) is a very high speed train developed by Patentes Talgo (Tren Articulado Ligero Goicoechea Oriol), a Spanish company. It is manufactured by the consortium of Patentes Talgo and Bombardier Transportation.

The train entered service with the name RENFE AVE Class 102 high speed trains, on the Madrid-Barcelona and Madrid-Valladolid lines in Spain. It is also known as Pato (which means duck in Spanish) as the train’s front part resembles the beak of a duck.

"Bombardier Transportation supplied 60 rail locomotives for the Talgo 350 trains on the Madrid-Barcelona line."

The train achieved a top speed of 365kmph during the trial run. All tests were completed successfully and the train was launched on the Madrid-Zaragoza-Lleida section of the Madrid-Barcelona line in February 2005.

The maximum speed of the train was initially restricted to 200kmph due to the absence of infrastructure necessary for operation of a train with such high speeds.

Design and features of the Talgo 350 trains

The T350 train set is designed to be optimally aerodynamic to handle air pressure and air currents at high speeds. It has a high level of redundancy in traction between rail and auxiliary systems. The car body is light in weight, airtight and pressurised so as to comfortably pass through tunnels and crossings.

"The development of Talgo 350 was initiated for the Madrid-Barcelona high-speed railway line."

Anti-overturning and anti-vertical hunting technologies are used for coupling the cars. The centre of gravity is made very low, ensuring consistency for passengers travelling. Independent axles and primary suspensions are provided to rolling assemblies between the cars. The rolling assembly axles are fixed in such a way that they hold the wheels parallel to the track even in curved stretches.

The train is designed for 25kV, 50Hz, 4,000kW power lines and standard gauge tracks. The wheel base of the vehicle is 2.65m and its maximum width is 2.96m. The height of the vehicle is fixed at four metres. It has two independent power bogies on either side. Anti lock brake systems are pre installed in the system with four discs per shaft.

The maximum commercial speed of the train is fixed to 330kmph with maximum acceleration of 1.2m/s2 in curves. The maximum train length is limited to 200m with 12 passenger cars.

The cars are equipped with Talgo Pendular type suspension. The train is provided with natural tilting system. The platform height is fixed very close to the floor for easy access for disabled passengers and children. There is a passageway of 815mm between two consecutive rail cars. An on-board computerised control system is provided in the train for safety and control.

The train includes many passenger friendly features. The seating is comfortable with good reclining angle, well equipped foot rest and an option to rotate the seat as per the passenger’s comfort.

The air-conditioning units are located under the frame. Passengers in Club Class have the option to adjust the air conditioning system with pre-installed nozzles.

The seats are equipped with video and audio devices with channel selector and volume control. Electronic information panels are installed inside and outside the car sets. These convey the location of the train to passengers, using a Global Positioning System and audio / video information alerts.

Contractors and suppliers for the Talgo 350

The light clusters for the vehicle were supplied by Siemens. ENOTRAC was contracted for conducting a study for management of the train’s safety.

Orders and deliveries of the very high speed trains

The manufacturing period is expected to be three years after which the consortium will be responsible for operation and maintenance for 12 years.