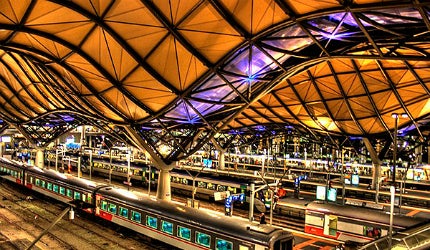 Southern Cross Station, formerly known as Spencer Street Station, began operations way back in 1859. The station is located on Spencer Street, between Collins and La Trobe Streets, and is the third busiest railway station in Melbourne, with average daily passenger traffic of 100,000. It serves the regional railway network operated by V/Line, The Overland rail service to Adelaide and the CountryLink XPT service to Sydney.

The station witnessed a redevelopment project carried out between 2002 and 2006 that increased the number of platforms to 14. Construction on two new platforms (15 and 16) began in 2009 and was completed in December 2013.

The 2002-2006 redevelopment project was undertaken to handle the current and anticipated increase in the number of new rail services. It formed part of the Victorian Government’s $2bn "Revitalising Victorian Rail" programme to improve passenger and rail service across the state.

The major attraction of the redevelopment project was the undulating wavy roof and the station’s architectural design, for which it won several awards, including the Lubetkin Prize in 2007.

Geelong line services began using the dedicated V/Line tracks between South Kensington and the new platforms 15 and 16 at the Southern Cross Station upon the completion of the 2009-2013 redevelopment project.

The station started operations in 1859 as Spencer Street Station with a single platform and a dock platform in the north, serving primarily goods trains at night.

"The station is located on Spencer Street, between Collins and La Trobe Streets, and is the third busiest railway station in Melbourne."

A platform was added in 1874 and the station was linked to Flinders Street Station from 1888 to 1894, through the construction of the Flinders Street Viaduct, which also allowed the running of passenger trains.

In 1915 the Flinders Street Viaduct was increased to four tracks and the period from 1918 to 1924 saw the increase of the station’s platforms to 14, with provisions of electrification and pedestrian subway facility.

A modernisation in the 1960s saw the construction of a new station building replacing the iron shades which existed earlier, a 1,355ft main platform, extension of the subway to country platforms, an underground loop with platforms 9 and 10 forming part of the suburban section, construction of a new double-track viaduct and re-signalling of the first four tracks for bi-directional operations.

The modernisation phase also increased the number of tracks connecting to Flinders Street to six.

The redevelopment of Southern Cross Station began in 2002, with the master plan released in 2001. The estimated cost for the redevelopment phase came to around $350m in 2001.

The redevelopment project consisted of constructing a transport interchange facility for both rail and bus, a new entrance, a commercial office tower, residential towers, a north south bridge at the western part of the site for pedestrians, concourses on Collins Street and Bourke Street, a retail plaza, an 800 bay car parking facility and a separate shopping complex, between Bourke and La Trobe Streets. The old station was closed and brought down in 2004.

Southern Cross Station is popular for its undulated trapezoidal roof system covering an entire city block of about 60,000 square metres. It is 23m at its highest point. The roof was specially designed to allow the diesel fumes, hot air and exhaust gases to move upwards and be dispelled through louvres using the force of the existing winds.

The project also witnessed the use of etthylene tetrafluoroethylene (ETFE) for the first time in Australia for constructing a building. The roof system provides sufficient ventilation and daylight.

Construction work at the site also included fixing 250 piles which are 600mm-1,500mm in diameter, using the ROCKET and Golder Associates field implementation (GARSP) equipment. The ground conditions, which consisted of basalt rock, clay, sands and siltstone rock, necessitated the use of this equipment.

A new twin track rail bridge over Dudley Street in West Melbourne was also constructed in October 2013 to provide easy access for regional trains across the suburban rail tracks to platforms 1 to 8 at Southern Cross Station. The recent redevelopment project also modified the existing signalling system for the metropolitan rail tracks and developed a new signaling system for the regional tracks.

The interchange facility comprises of a 30-bay coach station and an 800-bay car park, waiting areas, increased passenger information screens and a light filled open space to both Spencer and Collins Streets with the front part built of glass.

The station provides access to the platforms from both the Bourke Street Bridge and Collins Street Extension.

The station offers luggage lockers. Travellers Aid Australia provides a rest area and lounge facilities, free buggy transport for the elderly and people with disabilities, as well as public information.

Key players associated with the redevelopment

The main contractors for the redevelopment project were Leighton Contractors and Civic Nexus, while other partners included ABN Amro, Honeywell Limited and Delaware North Australia.

The design was provided by the Grimshaw Jackson Joint Venture. The security services at the station are provided by Wilson Security. The retail area at the site was constructed by Built.

WSP Lincolne Scott and its specialist brands, which included Built Ecology and Vision Design, played a crucial role in providing the environmentally sustainable design (ESD) and other services for the project.

ASSA ABLOY along with Geoffrey Mould supplied Lockwood door hardware to all new doors which included both high and low security access. The installation of the bore piles was taken up by Foundation QC.