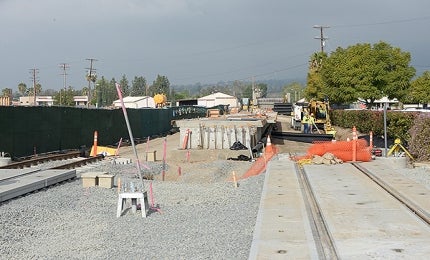 The Metro Gold Line, which is part of the Los Angeles light rail transit system, is currently being extended from its current terminus in Pasadena to Montclair under the second phase of the Foothill Extension Project. The new segment will extend over 24 miles and include 12 new stations.

Construction of the Pasadena to Montclair segment is divided into Phase 2A (Pasadena to Azusa) and Phase 2B (from Azusa to Montclair). Phase 2A began construction in June 2010 and is expected to be completed by September 2015, while work is yet to commence on Phase 2B.

The $1bn project is being developed by Metro Gold Line Foothill Extension Construction Authority and is fully funded by Measure R, a programme undertaken to reduce traffic congestion and transportation upgrades throughout the county.

The Metro Gold Line has undergone a number of extensions to provide transport to the residents of Los Angeles. The Foothill Extension Project, which extends the Gold Line from Los Angeles to Montclair, involves the segment from Union Station to Pasadena in the first phase and a new line segment from Pasadena to Montclair in the second phase. An additional phase involving an eight-mile extension to Ontario Airport is also under consideration.

The 13.7 mile long extension from Los Angeles to Pasadena was opened in 2003 and comprises 13 stations, connecting the cities of Los Angeles, South Pasadena and Pasadena.

Phase 2A of the second phase will be 11.5 miles long and will feature six new light rail stations at Arcadia, Monrovia, Duarte, Irwindale, Azusa-Alameda and Azusa-Citrus. It also includes the construction of 12 new and rebuilt bridge structures and a new $265m maintenance and operation facility, which will be a full-service centre especially designed and constructed for the maintenance of light rail vehicles.

Phase 2B from Azusa to Montclair will be a 12.3 mile segment and will feature six new stations at Glendora, San Dimas, La Verne, Pomona, Claremont and Montclair. The segment was approved by the Construction Authority Board of Directors in March 2013 and required an estimated investment of $950m.

The proposed Ontario Airport extension is not a formal part of the Foothill extension project but a feasibility study has been completed by the Construction Authority. The eight-mile extension will start at Montclair and terminate at the Los Angeles/Ontario International Airport.

Phase 2A sees the construction of a dual-track Gold Line Bridge to connect the existing Sierra Madre Villa Station in Pasadena and the future Arcadia Station. The bridge was completed in December 2012 with an investment of $18.6m.

"The Metro Gold Line has undergone a number of extensions to provide transport to the residents of Los Angeles."

Skanska USA was awarded a contract worth $18.6m to build the Gold Line Bridge. The $486m Pasadena to Azusa alignment design and build contract was awarded in July 2011 to Foothill Transit Constructors, a Kiewit-Parsons joint venture.