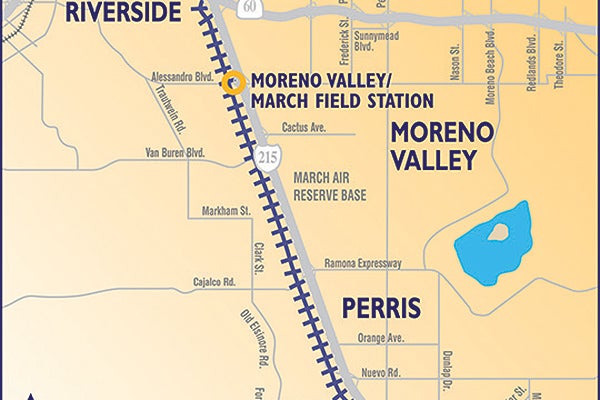 The Riverside County Transportation Commission (RCTC) began construction of the Perris Valley rail line extension project in Southern California in February 2014. The project includes expansion of the Metrolink’s existing 91 commuter line by up to 24 miles (38.6km) between Downtown Riverside and South Perris. The extension will also include addition of four new stations at Riverside Hunter Park, March Field, Downtown Perris and South Perris.

The Perris Valley line is expected to carry more than 4,000 passengers in a day upon completion of the expansion in December 2015.

"RCTC formally initiated the Perris Valley rail line extension planning in 2002 and conducted six public meetings for the same during the year."

RCTC conducted further supplemental environmental assessment (SEA) in 2009 and released the Draft SEA for public comment in 2010. The project faced litigation under the California Environmental Quality Act (CEQA), which was later resolved through a settlement in June 2013.

The Perris Valley rail line extension project finally took off with the receipt of FTA grant in December 2013.

The extended rail line will provide improved and alternate mobility without traffic jams as the tracks will run parallel to Interstate 215. The new line will connect to the 91 Line taking the commuters through Riverside County, Orange County and on to Los Angeles County. It will provide better access to the residents of Menifee, Murrieta, Temecula, San Jacinto, Hemet, Lake Elsinore and Wildomar.

The construction of four new rail stations along the line is expected to enhance the business through new investments.

The extension is expected to create employment opportunities to over 4,000 people during the construction phase.

"Ames Construction was awarded a $148.2m contract for the construction of the Perris Valley line."

The initial phase of construction includes double-tracking about nine miles of the route, construction of new stations, as well as improving rail crossings. It further includes installation of infrastructure and communications systems, and drainage and ballast works. It also includes rehabilitation and construction of railway tracks.

The extension line will be equipped with Metrolink’s Positive Train Control System that will provide protection against train collisions. The new line will offer more safety and include flashing warning devices, gates, raised centre medians, striping, signs and pavement markings. Pedestrian crosswalks will be built at two railroad crossings along the extension. The extension line will also have 18 upgraded at-grade crossings.

The total estimated investment for the construction of the extension is $248.3m, which will be funded through a combination of federal, state and local funds. The Federal Transit Administration granted $75m for the construction of the project in December 2013. The other sources of funding include Riverside County’s voter-approved Measure A programme, and an additional funding from the state of California.