16 million per annum per direction 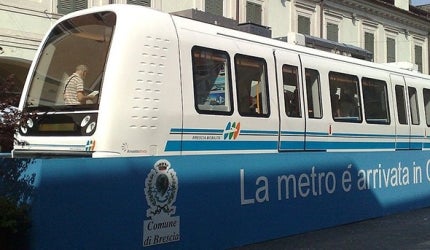 The Italian city of Brescia witnessed the opening of a fully automated metro rail system in March 2013. The 13.1km-long driverless metro system connects Prealpino and S. Eufemia Buffalora stations, located respectively at the north and southeast of Brescia.

A team including Ansaldo STS, Astaldi and AnsaldoBreda built the Brescia driverless metro system under a contract awarded in 2003.

The new metro aims to ensure Brescia’s passengers with frequent and punctual train services. The system can easily increase or decrease trains depending on any sudden changes in the number of passengers.

The driverless system is managed by a centralised control room, which monitors train movements round-the-clock and provides assistance to passengers. The automation also allows staff to focus on assisting passengers and taking care of safety issues.

"A team including Ansaldo STS, Astaldi and AnsaldoBreda built the Brescia driverless metro system under a contract awarded in 2003."

Back in 1986, the City Council of Brescia started to consider various transport choices that would solve the issue of rapid rise in vehicular traffic in the city. A number of options, such as trolley bus, light rail and metro were scrupulously examined from both commercial and technical perspectives.

A driverless metro rail system was finally decided as the ideal solutions for the city’s conditions. The tendering process for the construction of the automated metro was initiated in 2000. Three years later, the contract was awarded to Ansaldo STS, Astaldi and AnsaldoBreda.

Construction work on the Brescia driverless metro system began in January 2004. Work was originally expected to be completed in seven years, but archaeological findings, especially those at S.Faustino and Vittoria stations, necessitated further study of the planned alignment. Some of the stations then had to be redesigned and, as a result, the start of the metro services was put back to March 2013.

The Brescia metro system covers a total of 17 stations. Eight of them are present within deep tunnels, while five are located in tunnels just below the ground surface. Two of the stations are located above ground and the remaining two are located on viaducts at significant elevation. The stations are located fairly close together in a bid to encourage people to use the metro instead of driving.

The screen doors will act as barriers between the tunnels and the platform, ensuring that there is a safe distance between track and passenger. The doors also safeguard the passengers from the strong wind brought about by trains movement within the tunnels.

Part of a densely populated area of Lombardy, the city of Milano (Milan) is of great economic significance. At a transport crossroads of routes south from the Alps and east-west across northern Italy, Milan’s position and history have made it a long established part of the European trading and cultural mainstream.

A maintenance depot has been built at the S. Eufemia Buffalora area on 7.2ha of land. The depot features separate buildings for train garaging, maintenance, storage of spares, automatic washing of the trains, and service vehicle maintenance.

AnsaloBreda provided 18 three-car trains for the Brescia metro system. Each train provides seating for 72 passengers, while the total capacity of the train is 300 passengers.

The existing fleet will carry up to 8,500 passengers per hour per direction, with trains running at a frequency of three to six minutes.

The trains have a length of 39m and width of 2,650mm and are designed to run at a maximum speed of 80km/h. However, they will operate at a speed of 30km/h.

The last car of each train has a driving panel for handling emergencies and trains can be operated manually, if required. Traction is provided by six electric engines, which are coupled to the three cars.

Ansaldo STS acted as the prime contactor of the project taking care of issues related to power supply and automatic train control, in addition to supplying subsystems such as SCADA and telecommunication equipment.

AnsaldoBreda supplied the rolling stock, while Astaldi focused on the execution of the related civil works. Astaldi also managed issues related to the installation of electrical and mechanical systems.

Knorr- Bremse provided screen doors for the platforms, under a subcontract from the main contractors.

IVU.Plan facilitates proper planning of duty and timetable, while managing the deadlines and mileage of trains is the function of IVU.Vehicle. IVU.Fleet makes sure that all needed information is continuously provided to the control centre. IVU.Realtime facilitates direct viewing of the control centre by the travellers. IVU.Ticket is a software system supporting the sale of tickets along with extending support to e-ticketing.

The first railway line of Brescia driverless metro is just a small part of the planned extensive metro network encompassing the entire city, as well as the suburban routes. Plans are in place to construct a 3.5km line running between Lamarmora Station and Fiera Exhibition Ground, via a densely populated zone. It is also being proposed to connect Prealpino and Inzino by a metro line, passing through Trompia Valley.

The traffic on the main road of the Trompia valley is very high, with around 20,000 vehicles on an average business day. Providing metro rail network to this area is expected to lead to a drop in the number of cars, which will in turn reduce accidents on the roads.