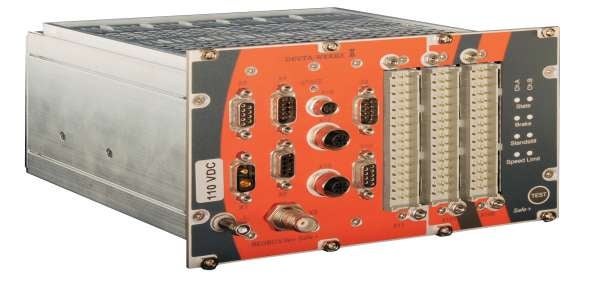 Travel data recorders in public transport must fulfil a variety of functions today. DEUTA-WERKE presents an additional safety module the Safe+ for its multifunction recorder family the DEUTA REDBOX. This Safe+ unit was developed according to EN 50128 and meets the requirements up to Safety Integrity Level 4 in the following safety relevant functions:

The safety circuit SIFA is an integrated device on railway traction vehicles which causes emergency braking when the driver becomes incapable of action or incorrectly operates a pedal or a press button. There is a standstill detection alert as soon as the train has come to a stop so that for example, a mechanism is enabled to open the doors. In addition, the rollback protection guarantees that the train will not move unintentionally when standstill has been requested. The monitoring of maximum and limit speed and the correct transmission of train speed readings to the driver display are further important requirements for more safety in the driver’s cab.

The two-channel redundant ‘fail safe’ structure forms the basis of the functional and technical safety of the Safe+. As a watchdog cyclical self-tests check the functionality of the system. The sophisticated DEUTA REDBOX concept provides travel data recordings as well as innovative service and evaluation possibilities. With web interface the DEUTA REDBOX recorder supplies completely new service options. The DEUTA REDBOX Safe+ combines all functions in a space-saving casing which, due to its construction, adapts easily and flexibly to the environment. As an extension to external train safety systems, Safe+ can be combined with all REDBOX variants for use in different railway vehicles.