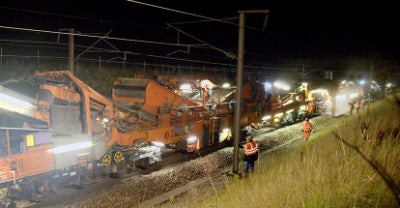 On the high-speed line LGV Sud-Est (Ligne à grande vitesse Sud-Est) between Paris and Lyon renewal of the entire ballast bed has been carried out since 2009. Plasser & Theurer machines have been playing a crucial role in this major construction project.

During every night-time track possession, ballast is cleaned on an 800m long section with an excavating depth of 350mm. On average, 60% of the ballast can be reused. This enables enormous savings with regard to both this expensive resource and its transportation.

Cleaned ballast and new ballast are returned to the track layer-by-layer. A dynamic track stabiliser homogenises every single layer. This enables the resistance to lateral displacement of the track grid to be increased. Combined with a targeted initial settlement of the track, the intervals between maintenance are extended.

The machine system of the RM 900 HD-100 combines several stages of work such as excavating, cleaning or returning the ballast to the track and performing the first stabilisation pass.

The next work stages are the supply of new ballast, two tamping passes, dynamic track stabilisation and adjustment of the overhead line.

Clearance for the maximum line speed of 300km/h can be given after de-stressing the track and after the final lifting and lining. For this purpose, the rails are cut to a certain length to release the stresses caused during maintenance. Then, the rails are joined again to form continuously welded track.

Due to the busy timetable during the day, all works must be carried out exclusively at night, between 22:30 and 5:00. During the day, TGVs travel at 120km/h on the tracks under repair. The core element of this construction project is the RM 900 HD-100 ballast cleaning machine of Colas Rail: this machine is designed to achieve cleaning outputs of 900m³ per hour. At the start of the work site, an on / off-track digger is used to excavate the cutter bar hole. Once the chain cutter bar has been placed, the machine is put into operation.

To ensure a 99% availability of the machines, they are maintained during the day. Every spare part is held in stock twice to ensure optimum availability. The success of a construction project of this size depends on how it is organised. On this project, the construction firms Colas Rail and ETF have been collaborating with the French railway SNCF and have been doing an excellent job.

"Thanks to our spare parts store and staff the machine’s efficiency is 99.5%," said Aurélien Marteau, deputy head of maintenance, Colas Rail.

In 1981, the success story of TGV high-speed trains began in France when the line between Paris and Lyon was opened. From this moment on, the travelling time between the two cities was reduced from four to two hours and its market share was significantly increased compared to domestic flights.

Having been in operation for 30 to 35 years, the decision was taken in 2009 to perform ballast renewal on the entire double-track line with a length of more than 800km in total. The project is scheduled to take 12 years. Now, about half of the planned works have been completed.