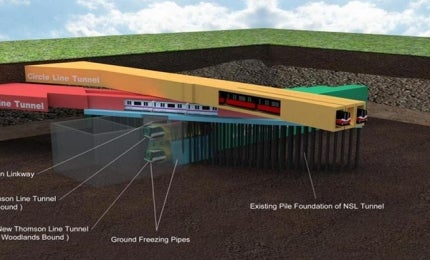 The Thomson Line (TSL) is a new 30km underground mass rapid transit (MRT) system being developed by Land Transport Authority of Singapore. The new line will link the northern part of Singapore to the central business district (CBD) and Marina Bay area.

The line will comprise 22 stations and six interchange stations that will link with the metro lines from the existing network. The line is expected to benefit approximately 400,000 commuters and reduce travel times by half.

Ground-breaking ceremony for the project was held in June 2014 and full completion is expected by 2021.

The Thomson Line will benefit passengers living along the North South corridor, who are connected directly to the Marina Bay. The line will connect to the East-West Line, North-South Line, North-East Line, Circle Line, and the Downtown Line. It is also expected to link communities in Woodlands, Sin Ming, Thomson and Kim Seng to the CBD and to the rest of the island.

"The line is expected to benefit approximately 400,000 commuters and reduce travel times by half."

The Thomson Line depot will be located at Mandai and will comprise an operation control centre, as well as a stabling and maintenance facility for the TSL trains. The line will intersect with Circle Line and the North-South Line at Marina Bay station.

Ground-freezing technology will be applied to prevent water seepage during tunnel construction at the Marina Bay station.

Rolling stock on the Thomson Line

The Thomson line will be operated with Type C151B six-car metro train sets, which are fully automated and driverless trains. The train sets will be the first in Singapore and will contain five doors on each side to facilitate smoother passenger boarding and alighting.

The trains will be operated from the 750V DC third rail power supply system present on the Thomson Line.

Communication-based train control moving block technology will be used for the Thomson line. It will be supported by automatic train supervision system and computer-based interlocking technologies to enable automated driverless train operations.

The communications system will include a series of sub-systems, including the communications backbone network, digital trunked radio, video surveillance, public address, telephone and travel information system.

Hock Lian Seng Infrastructure was awarded a contract worth S$222m (approximately $177m) for the Maxwell station construction. China Railway No 5 Engineering Group was awarded the design and construction contract for the Lentor station and its associated tunnels.

The Mount Pleasant station and tunnels construction contract, worth S$207m (approximately $165.12m), was awarded to the joint-venture of RSEA Engineering, Eng Lee Engineering and Wai Fong Construction. Gammon Construction is responsible for the design and construction of the Mayflower station.

Shanghai Tunnel Engineering was engaged for the construction of twin bored tunnels between Woodlands Station and Woodlands South Station.

Brown Consulting was awarded an A$14m contract for providing construction engineering and supervisory services for the Thomson line.

The consortium of Kawasaki Heavy Industries and CSR Qingdao Sifang was awarded the contract for providing locomotives for the Thomson Line. Kawasaki will look after the overall train design while CSR Qingdao Sifang will be responsible for the train body shell and the final assembly.