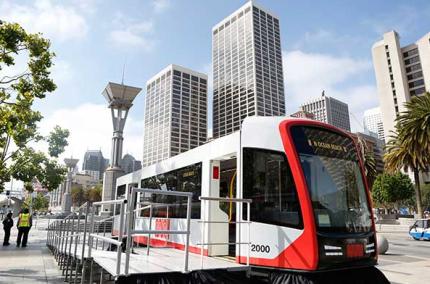 Siemens’ S200 SF Light Rail Vehicle (LRV) is a sleek and lightweight train being manufactured to ply on the San Francisco Municipal Transportation Agency’s (SFMTA) Muni Metro, the third-busiest light rail system in the US.

The Muni transit system is currently served by a fleet of 151 LRVs, which will be replaced by the S200 SF LRVs and expanded by another 64 trains in phases by 2028.

Siemens will supply up to 260 S200 SF LRVs to provide improved services and help meet the Muni transit system’s expected passenger traffic of more than one million a day by 2040.

The trainsets are being manufactured at Siemens’ solar-powered rail manufacturing plant in Sacramento, California.

The first production LRV in the series was delivered in January 2017, while three more trains are currently in production as part of the initial batch.

BART’s Fleet of the Future Project, San Francisco, US

San Francisco Bay Area Rapid Transit District (BART) will replace its fleet of existing 669 rail cars, which are the oldest in the country, with 775 new rail cars under a project known as the Fleet of the Future.

Based on Siemens’ Model S200, the S200 SF LRV is a hybrid train integrating the company’s high-floor and low-floor light rail platform technologies.

Each trainset is 22.86m-long, 2.65m-wide and approximately 3.5m-high with its pantograph locked down, and features an entrance height of 0.864m.

The trains have the capacity to accommodate 60 seating passengers and 203 total passengers each. Up to four wheelchair spaces or bicycle areas are also featured in each train.

S200 SF LRV’s exterior design and interior is based on input and feedback from more than 8,000 Muni passengers.

The Skyline design was selected for its exterior in place of the other two additional designs, namely the Presidio and the Gate.

“Equipped with Siemens proven IGBT propulsion system, the lightweight drive system of the train will be capable of recovering the braking energy.”

The trains’ lightweight drive system is equipped with Siemens’ proven IGBT propulsion solution and will be capable of recovering the braking energy.

The train will be equipped with state-of-the-art heating, ventilation and air conditioning (HVAC) equipment control systems in order to save energy and reduce operating costs.

Both the interior and exterior of the train will be equipped with an energy-efficient LED lighting system, which consumes up to 40% less energy than standard neon lighting units.

Siemens’ new door systems are designed with fewer parts and the train’s serviceable components can be easily disconnected, replaced and reconnected, alleviating the repair process.

The trains are designed to travel for up to 59,000mi without repair, compared to the existing LRVs, which require repairs after every 5,500mi covered.

The carbody is designed to improve crashworthiness and operator protection, while enhanced visibility for the train operator will ensure safety for pedestrians and cyclists.

In addition, the train’s hydraulic brakes have been designed to possess the fastest reaction time possible, reducing the braking distance.

“The first option was exercised by making an order for 40 additional trainsets, valued at $210m, in January 2015 increasing the order size to 215 LRVs.”

SFMTA awarded Siemens the initial order for 175 LRVs in Sepember 2014, which was valued at $648m.

The first option was exercised via a $210m order for 40 additional trainsets in January 2015, increasing the total order size to 215 LRVs.

SFMTA expects to source $153m from the California cap-and-trade funds and the remaining $57m from its own revenues.

A grant of $41.1m was awarded to SFMTA by the California State Transportation Agency (CalSTA) in new cap-and-trade funds in June 2015 as part of the Transit and Intercity Rail Capital Program (TIRCP).

The project is also being financed through other sources such as the Federal Transit Administration’s (FTA) Central Subway Project funding sources, the Prop 1B State Bond and the San Francisco County Transportation Authority’s (SFCTA) Proposition K funds, as well as grant funds arranged by the Metropolitan Transportation Commission (MTC).