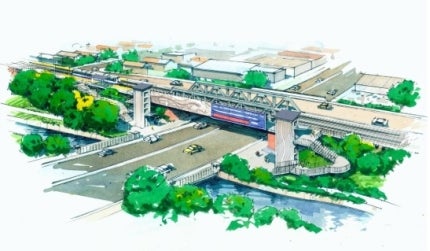 The Inner West Light Rail running between Central and Lilyfield has been expanded by a further 5.6km from Lilyfield to Dulwich Hill. The extension included the construction of nine new stations along the line.

The project was launched as the first step for Sydney light rail expansion and initiated by the New South Wales (NSW) Government. Services on the extended line began in March 2014.

"The project was launched as the first step for Sydney light rail expansion."

The project also included installation of power, safety, signalling and communication systems along the extension. Real-time passenger information systems were installed at all the new stations. The line has a single overhead at 750V DC traction power supply.

The design, construction, commissioning and testing on the line was completed within 18 months. Preparatory works, such as surveying, investigation and other preconstruction works, commenced in July 2012. Major construction commenced in November.

Light rail came to Sydney, Australia, in 1997 with the opening of its first modern tramway route from Central Station to the urban area of Pyrmont. The light rail route joined the eight-station monorail loop – which was completed in 1988 – and heavy rail commuter and bus services in providing public transport into the city.

Associated infrastructure included a 3m wide pathway from Cooks River to Sydney Harbour for pedestrians and cyclists, pedestrian crossing point at each stop, location signage and wayfinding as well as appropriate lighting for the shared path.

Contractors for the Lilyfield to Dulwich Hill light rail extension

In May 2012, John Holland was awarded with an $85.5m contract for providing the detailed design and construction works on the extension line. The contract also includes delivery of nine new light rail stations along the line, as well as the power and signalling systems and bridge works.

Cardno was appointed as technical advisor to provide streetscape designs for the extension project. Leichhardt, and Ashfield and Marrickville Councils along with other government agencies are being consulted on the project.

The extension line operates the same seven ABB Variotram LRVs that are currently being operated on the main line, along with four new light rail vehicles.

"Services on the extended line are began in March 2014."

The LRVs are single deck, air-conditioned cars of 29m length and a 2.65m width. The electric powered vehicles have low floor design and sliding doors. They feature disability access provisions, as well as modern passenger surveillance and communication systems.Each LRV contains room for about 70 seats and a standing space for another 130. The average speed of the train will be about 25km/h and the maximum speed will be about 80km/h.

The NSW Government allocated $103m for the expansion in the 2011-12 budget of light rail, which included construction of the inner west extension, as well as investigations into further extensions. It also sanctioned $116m towards the light rail extension project from its budget for 2012-13. The Government also contributed an additional fund of $25m for the future development of the light rail.