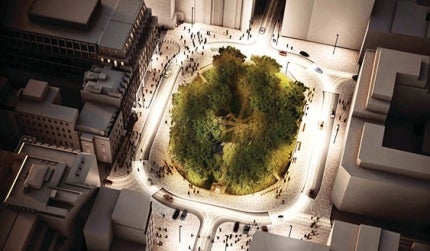 Bond Street station is being constructed at New Bond Street in London as part of the Crossrail project. Construction of the new station began in 2011 and is expected to be completed in 2017. The existing Tube station at Bond Street is also being upgraded simultaneously as part of the London Underground Upgrade Programme (LUUP).

"The new Bond Street station will be jointly operated by Crossrail and Transport for London."

The new Bond Street station will be jointly operated by Crossrail and Transport for London (TfL). The underground station will create access to Paddington, Whitechapel, Farringdon, Liverpool Street, Canary Wharf, Custom House and Tottenham Court Road stations, which are part of the LUUP.

The new station, along with the tube station, is expected to handle 220,000 passengers per day, upon Crossrail entry into service in 2018.

Key journey times that will be reduced from Bond Street station include Abbey Wood (45 minutes to 25 minutes), Maidenhead (71 minutes to 40 minutes) and Ealing Broadway (25 minutes to 10 minutes) upon the completion of the Crossrail project.

The existing Bond Street station, located within the city of Westminster, handles more than 155,000 commuters per day, which is, however, unable to match the pace of the rapid growth in passenger flow.

A new station was proposed to be built in order to handle the increasing number of passengers. It will facilitate passengers travelling between the existing Central and Jubilee lines.

Crossrail is a capacity enhancement rail project centred on London. It involves the laying of a new 118km rail track from Maidenhead and Heathrow in the west, to Shenfield and Abbey Wood in the east. The project will allow an additional 1.5 million people to travel between London’s key business districts in just 45 minutes.

A number of improvements were also proposed to the existing tube station, including the construction of a new entrance on Marylebone Lane, new ticket hall, installation of additional escalators to the Jubilee line and lifts to the platforms.

The upgradation of the tube station is expected to be completed in 2017.

The westbound tunnel will run at a depth of 26m, parallel to and approximately 100m south of Oxford Street. The platform tunnels will each be 260m long, while the distance between the two tunnels will be 45m. The tunnel construction is scheduled to be completed in the third quarter of 2014.

The new station will feature four lifts and nine escalators.

A step-free passenger link tunnel is also planned to connect the new station with the existing tube station, which is being renovated as a part of the construction.

Contractors involved with the new station project on Bond Street

"The existing Tube station at Bond Street is also being upgraded simultaneously as part of the London Underground Upgrade Programme."

A Costain-Skanska Joint Venture (JV) is the main contractor for the project. Crossrail awarded a £35m ($52.58m) contract to the JV to carry out civil engineering works at Bond Street station in March 2011. The contractual scope includes the construction of the western and eastern ticket halls, and installation and construction of piling, diaphragm walling and plunge columns in the main box.

A £110m ($165.27m) contract was awarded to the same JV in February 2013, for the construction of ticket halls, including platform fit-out and mechanical and electrical services at the ticket halls.