24 trains per hour each way (peak)

Joint venture between Government and TfL

Links existing routes at either end

Trains each designed for 1,100 passengers

Expand
The remodelled exterior of Abbey Wood station.
With new electrification east from Maidenhead, Thames Valley stopping services would be transformed as part of the Crossrail operation.
The future equivalent of this Shenfield-bound train will be part of a Crossrail service using a tunnel beneath central London.
Crossrail's south-eastern arm will add rail capacity at Canary Wharf to that of the Jubilee Line and Docklands Light Railway.
The western portals of the main tunnels beneath central London will be at Royal Oak, near Paddington.
The go-ahead for Crossrail was given in October 2007.
Ongoing construction work for the Crossrail project at Moor House.
Crossrail can reuse the abandoned North London Line alignment (seen right) at Custom House, offering interchange with the Docklands Light Railway.
Freight interests have expressed concern that Crossrail services will restrict freight services at busy locations, such as Stratford on the Great Eastern mainline.
The modified Crossrail route.
In east London, Crossrail branches to the Great Eastern line (foreground) and Canary Wharf (left, background). 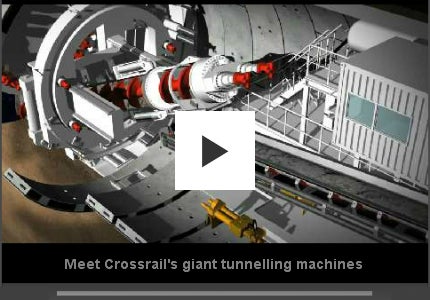 Take a look at the giant tunnelling machines being used to bore the holes for London’s new Crossrail service.

The project will allow an additional 1.5 million people to travel between London’s key business districts in just 45 minutes.

The £16bn project was originally scheduled for 2017 opening, but has been delayed until 2018 following a spending review.

Typical current journey times from north Kent to central London are around an hour. Crossrail will cut these by around a third. The journey to Heathrow, currently more than one and a half hours, will be cut by up to a quarter.

Crossrail has been promoted by Cross London Rail Links, a joint venture company formed by Transport for London (TfL) and the Strategic Rail Authority (SRA), the latter now defunct and its role assumed by the Department for Transport.

As London’s importance as an employer increases, Crossrail will make new developments in the City, Isle of Dogs / Canary Wharf and the Thames Gateway accessible from other areas, without imposing extra burdens on the already strained Underground and urban road network. The project is expected to boost the UK economy by £20bn.

Origins of the massive Crossrail project

“Crossrail will make new developments in the City, Isle of Dogs / Canary Wharf and the Thames Gateway accessible.”

In October 2007, the UK Government secured a funding deal for Crossrail, giving the go-ahead to the construction of the project running between Paddington and Liverpool Street mainline stations.

The route, agreed in principle in summer 2004, would take it through the centre of the city, with trains capable of carrying up to 1,100 people every two and a half minutes.

Crossrail’s brief is to provide the transport capability to cope with London’s forecast population and economic growth. With Crossrail services taking over from many of those routed into the termini, capacity will be freed at existing termini such as Liverpool Street and Paddington.

New opportunities for interchanges with TfL Underground and Overground services will further reduce the volumes currently concentrated at the termini. Moreover, the central London stations in business and retail areas will remove the need for many passengers to transfer onto other modes at all. 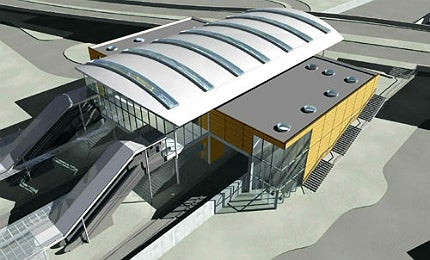 The use of the route for freight trains had been envisaged, but this does not form part of the business case to build the line. The Freight on Rail partnership of rail freight operators, Rail Freight Group, Network Rail, the transport trade unions and Transport 2000 have expressed concerns about the potential track restrictions that Crossrail could cause to the main lines at either end of the route which carry high levels of freight.

In the core central London section, there will be stations at Paddington, Bond Street, Tottenham Court Road, Farringdon, Moorgate / Liverpool Street and Whitechapel, all with interchanges for Underground and commuter ‘heavy rail’ stations.

A major change to the plan was the decision not to run services through to the new station being built at Ebbsfleet, Kent, for High Speed 1, the Channel Tunnel Rail Link. The main difficulty involved guaranteeing service reliability along the congested North Kent Line. Instead, trains will terminate at Abbey Wood on its south eastern section. A new cross-platform interchange will be built at Abbey Wood to ensure a smooth connection for passengers wishing to travel to and from North Kent, with a maximum five-minute wait for a Crossrail train during peak hours.

The heart of the project is the construction of a new 21km (12 mile) tunnelled route across London, including the branch of the eastern end to Shenfield and Abbey Wood. Crossrail will, for the first time, allow existing suburban east-west rail services to run through central London. Portals for the main tunnels will be at Royal Oak to the west of Paddington and in the east at Custom House and Pudding Mill Lane.

“Crossrail’s brief is to provide the transport capability to cope with London’s forecast population and economic growth.”

There were earlier intentions for other lines to be promoted under the Crossrail identity, but these have now all been shelved in favour of promoting only the route described here. For through running, the Great Western main line west of (Heathrow) Airport Junction would need electrification as far as Maidenhead, the proposed western limit of Crossrail operations. Many existing stations would need platform lengthening to accommodate the new trains.

Crossrail will be a major engineering exercise needing a wide range of multidisciplinary skills. Substantial pre-planning and design work has been carried out to demonstrate that the scheme is technically feasible, and can be built on time and on budget. Most of the spoil (earth removed from the tunnels) will be removed from four portal sites, keeping local disruption to a minimum.

The project’s twin 6m bores totalling 41km (25.5 miles) will be constructed with tunnel-boring machines designed for the ground conditions and ensuring that ground movement is minimised. More than 8,500 jobs are envisaged as being needed to create the infrastructure. Construction will incorporate the latest elements of proven best practice in order to minimise ground-borne noise and vibration.

The extensive underground infrastructure and location of existing deep building foundations have determined the route alignment, which was safeguarded 12 years ago.

Preliminary studies indicated that re-used railway land at Romford in east London could be the site of the system’s depot, although Brentwood and existing maintenance sites at Ilford and North Pole (formerly Eurostar) have also been considered. Recent practice indicates the likelihood of a rolling stock build-and-maintain operation for a specified duration. 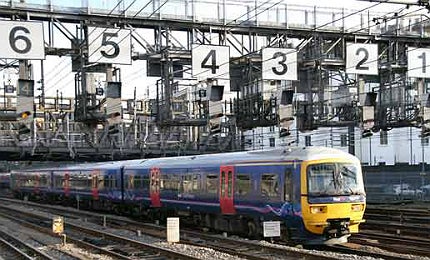 The Crossrail fleet will comprise of purpose-built, energy-efficient, high-performance trains, possibly twin five-car dual voltage sets using overhead lines and third rail systems; their performance will be capable of delivering a train approximately every two minutes in the central London area. Carriage design will facilitate rapid entry and exit, and interiors will be climate controlled. Crossrail will be accessible to mobility impaired passengers. Rolling stock commissioning is likely to be concentrated on the Great Eastern mainline.

The tenders originally due to be issued in 2010 were postponed to 2012. The delay will result in late introduction of the new carriages on the Great Eastern mainline.

Signalling and communications along the line

The signalling and communications strategy of Crossrail is still in the early stages of development, although the European Rail Traffic Management System (ERTMS) will be installed. Signalling will need compatibility with the traffic on lines being integrated into the scheme. The deep tunnel section will call for a high level of security, with the capability of emergency services access and for evacuation of large numbers.

Network Rail awarded a major contract worth £130m ($198m), in March 2013, to Balfour Beatty Rail for the construction of a two-mile section of the Crossrail line from Plumstead to Abbey Wood in south-east London.

Siemens has also been awarded a contract to supply the operational control and communications systems for the twin tunnels and nine new central stations, in March 2013.

The ATC joint venture (JV), consisting of Alstom, TSO and Costain, has been awarded a fit out and commissioning contract worth €350m ($455m) for the tunnels, in April 2013.

A consortium of Siemens and Invensys Rail will install a communications-based train control (CBTC) system on the central section of the project as part of a £50m ($73.1m) contract awarded in November 2012.

Network Rail awarded a £50m ($73.1m) contract to Carillion in December 2012 to build a larger flyover at Stockley, near Heathrow Airport Junction in Hillingdon.

BAM won a £20m ($30.43m) civil works contract in December 2012 for the construction of a rail underpass and associated track work at Acton freight yard in Ealing.

The future for the ambitious Crossrail project

“Set to be Europe’s largest civil engineering project, major works began in 2010, with the first service trains expected to run in 2018.”

Hosting an Olympic Games was previously seen as impetus for Crossrail’s earlier development. However, London’s winning bid for the 2012 Olympic Games did not include Crossrail as part of the transport provisions.

That role was by implication deemed adequately catered for by the Javelin / High Speed 1 service to the Olympic Park at Stratford, also by expansion of the Docklands Light railway, improvements to the Underground and creation of the Overground format. Nevertheless, Crossrail has now joined what appears to be a relative boom in spending on UK railway projects.

Although the Crossrail go-ahead has been widely welcomed, aspects continue to generate controversy. As Crossrail is projected as a standalone operation, this precludes integration with long-distance UK services. More specifically, maintaining the Heathrow rail service as a spur, rather than enabling long-distance through-services, is felt to be missing a larger opportunity to encourage rail access as per the LGV eastern by-pass of Paris via Charles de Gaulle airport or the intentions for the Berlin Brandenburg International.

In July 2008 the Arup Company proposed a separate project related to new high-speed lines to fill the long-distance role at Heathrow. The decision to make Maidenhead the western terminus, as opposed to the important rail interchange of Reading just to the west, has attracted also widespread comment. In February 2008 the DfT announced an intention to safeguard land for potential Ebbsfleet and Reading extensions, albeit without making any commitment for the proposed structure to be amended.

The municipal governing body of the City of London, the City of London Corporation, agreed to help meet an approximate £400m funding gap that was holding back the scheme before final approval was given in October 2007. Becoming the Crossrail Act 2008, Royal Assent was received in July 2008, with the Board being restructured shortly thereafter.

Set to be Europe’s largest civil engineering project, major works began in 2010, with the first service trains expected to run in 2018, effectively adding ten percent to the capacity of London’s public transport. The expectation is that Crossrail will become a wholly owned TfL subsidiary.

Generically referred to as ‘the Tube’, London is the oldest and remains one of the largest metro systems in the world, carrying over one billion passengers a year.

TELICE
TELICE, a company founded in 1973, is a supplier and...
Jewers Doors
Jewers Doors engineers and manufactures the Phoenix range of high-quality...
Firstco
Since Firstco was established in the UK in 1998 the...
SUBSCRIBED