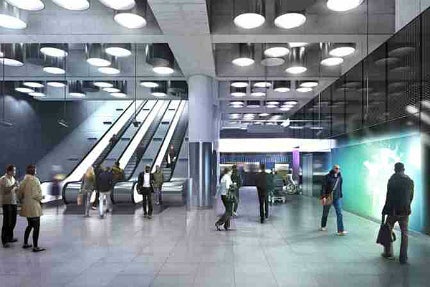 Crossrail and Transport for London (TfL) are jointly redeveloping the existing Tottenham Court Road Tube station and constructing a new station with an estimated investment of £1bn ($1.6bn). The redevelopment of the 100 years-old tube station began in June 2011 and is expected to be completed by 2016-2017.

The station is located at the intersection of Oxford Street, Charing Cross Road and Tottenham Court Road. The existing underground station handles 150,000 passengers per day, which is expected to increase to 200,000 a day when Crossrail comes on stream.

The number of commuters travelling on these routes has increased in the past few decades, resulting in congestion during peak times. TfL initiated the redevelopment of the existing tube station and construction of a new station as part of the London Underground Upgrade Programme (LUUP), in order to handle the increasing passenger traffic.

"The number of commuters travelling on these routes has increased in the past few decades, resulting in congestion."

The platform tunnels will be 260m long and will be 25m apart from each other. The 500,000ft² of area at the eastern end of Oxford Street and Tottenham Court Road is allocated for retail, office and residential purpose.

Contractors involved with construction at the tube station

"Key journey times will be reduced from Tottenham Court Road station to other stations including Canary Wharf."

Balfour Beatty Morgan Vinci joint venture (JV) (BBMV) was appointed as the contractor to build the station box for the western ticket hall in June 2012.

Laing O’Rourke will construct the western ticket hall under a £200m contract received in June 2012. Kone and Otis received a contract to install incline lifts and escalators at the station in July 2012.

Halcrow provided design and planning services for the station upgrade under a £300m contract.

Arup, Atkins and Hawkins Brown received a contract to provide detailed design for the station in June 2009.

London Bridge railway station, built in the1830s, is one of the oldest stations in the world.

Bond Street station is being constructed at New Bond Street in London as part of the Crossrail project.