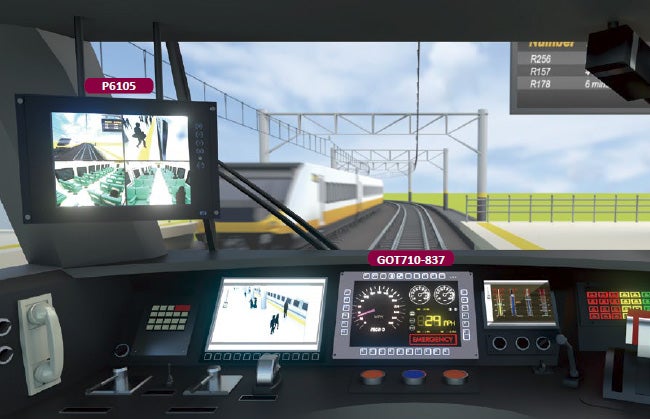 At Axiomtek, our aim in the intelligentisation of the rolling stock market is to meet important technological and economic objectives such as increased capacity and asset utilisation, higher customer service levels, improved reliability and safety, better energy efficiency and less emissions, as well as optimized economic viability and profits. An active system provider in the intelligent rolling stock market, Axiomtek has been making a contribution to the train control, passenger information and broadcasting systems.

If replacing a traditional pointer dashboard with a digital touch panel computer in a locomotive or a power car, a train control system is more advantageous in handling real-time information for tighter safety and seasonable emergency measures. Moreover, continuous monitoring of trains and safe signaling offers numerous advantages in train operations today. Drivers must receive real-time recording from platforms and carriages so as to deliver critical information to passengers immediately in case of an emergency to ensure passenger safety.

Why the GOT700 Series

Axiomtek’s Touch Panel Computer GOT700 series is a leading control system designed for rolling stock applications in harsh conditions; it helps drivers stay informed of the real-time status of their trains, thus enabling them to adjust the train speed or stop the train to avoid any hazards.

Particularly, the ‘onboard’ flash and system memory, along with all ‘lockable’ interfaces are particularly designed for high vibration environments, thus providing stability during train movement. Above all, the most important safety and operational functions related to optimization of headway times, punctuality and reliable track-to-train transmission can all rely on Axiomtek’s GOT700 series to fulfil.

Proudly, we would like to announce that Axiomtek’s GOT712-837 were awarded the "Taiwan Excellence 2017" – an award that Axiomtek has been receiving since 2014 for its various outstanding product lines. This has said thousands of words about Axiomtek’s long-time efforts in and contributions to the railway market!

Axiomtek’s GOT700 series railway power module has undergone rigorous testing, supporting operations at an extended temperature and enduring vibration shock under EN 50155 certification, meeting the electromagnetic compatibility under EN 55022 and the anti-fire code under EN 45545.

Also, conforming to the UIC612-01 standards, the technical specifications of hot keys featured on an IP65-rated front bezel of the GOT700 series are universally defined via a friendly human machine interface (HMI), thus offering drivers worldwide consistent command of different locomotives’ tasks, including monitoring and controlling of speed, temperature and security factors, as well as dynamic programming for the optimization of the running profile of a train.

Over the years, Axiomtek has been dedicated to the railway market and we are committed to continuously embracing cooperation with major train manufacturers and system integrators from all over the world to continue to work on the intelligentization of the railway industry.