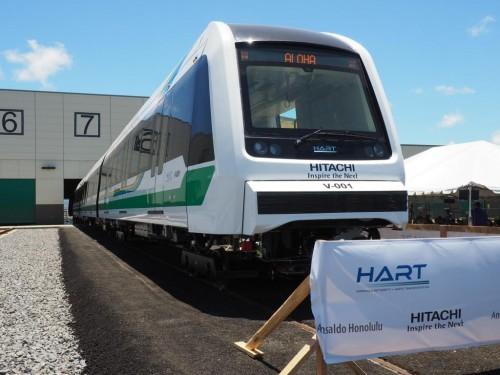 The PTW2 500X static train weighing system weigh’s each axle of the rail vehicle and allows for highly accurate individual wheel weights. The rail scale can be used at a variety of locations due to its portability and ease of use. An added benefit of the single axle weighing system is that with a length of only 500mm the system conveniently installs between rail fastenings, requires no track modifications or civil works and is ready to weigh within 15 minutes.

One of the static systems will be used at Hitachi’s custom designed manufacturing facility in Miami. This facility will manufacture and assemble 136 metro cars primarily for Miami-Dade County transit (metro). The first of the metrorail vehicles will likely to go into service late 2017 after testing.

The other static system will be used for the Ansaldo Honolulu transit system with Hitachi Rail Italy responsible for the manufacturing and testing of 20 trains. These four car trains are a major component in what will be the US’s first driverless rail transit system. Due to the portability and flexibility the rail scale can also be used at Hitachi’s Pittsburg facility where the final assembly will take place.

Paul Horsfall, managing director, commented that ‘we have a longstanding and significant relationship with Hitachi Rail Italy and this project demonstrates our ability to provide an intuitive cost effective solution and help contribute to the latest generation of rail vehicles’.