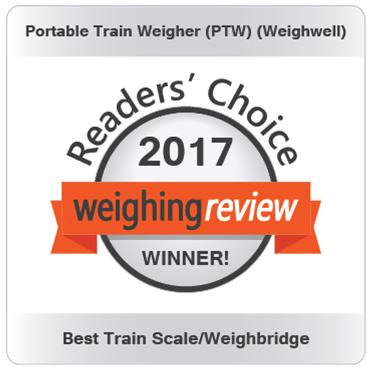 Weighwell has been awarded the 2017 Best Train Scale at this year’s Weighing Review Readers’ Choice Awards for its Portable Train Weigher (PTW), having received votes from 69 different countries across the world.

Now in its fourth annual edition the Weighing Review Awards is the only international voting competition that comprises of the major innovations and best products in weighing technology. This year’s awards was comprised of 17 different categories, 38 different weighing companies and 61 different products / solutions.

Our flagship product the PTW epitomises our ability to trade worldwide with its universal design (rail scales in over 30 different countries). The main feature of the PTW system that allows our innovative product to excel overseas, build prominent relationships and exploit new markets is that it can be adapted to various track gauges and rail profiles.

Paul Horsfall, managing director said "It is a privilege to be recognised by the international weighing community at this year’s awards. This award is further recognition of the unique nature of our PTW and our extensive knowledge of the train weighing industry which has led to longstanding relationships with a variety of customers such as Hitachi, Siemens and Bombardier. This award is also testament to our commitment to providing the best service and support to our customers based on innovation and product excellence".

Weighwell Engineering changed the concept of train weighing through inventing and designing a portable train...