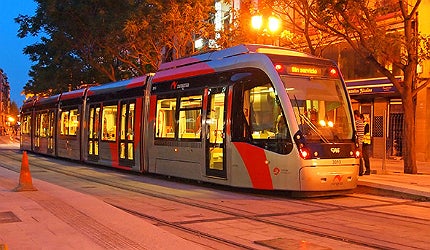 Zaragoza tram system serves the city of Zaragoza, the fifth largest city in Spain. The tram service will connect the historic and modern areas of the city. Zaragoza is a province in the autonomous region of Aragon in Spain and is the 35th most populous municipality in European Union.

The 12.8km Zarazoga tram system will include 25 stops. The project is being implemented by the TRAZA consortium, consisting of Tuzsa, CAF, FCC Construcción, Acciona, Ibercaja and Concessia at a cost of $541.16m (€400m) and is expected to be completed in June 2013. Traza will operate the line for 35 years.

FCC and ACCIONA won the first prize for Best Urban Integration in 2012 from the International Association of Public Transport for its work on the Zarazoga tram project.

Zaragoza’s original tram system was started in the late 1800s, reaching its peak in the 1950s before falling into decline and being converted to bus lines. The last Zaragoza tram line disappeared in January 1976 and the operating company changed its name to Transportes Urbanos de Zaragoza (Urban Transport Company of Zaragoza).

In 2009, a year after the city’s successful hosting of Expo 2008, a team of companies was contacted to build a new tramway in the city. The first phase of the system was built using standard technology.

The second phase of the tramway, which mainly runs through the old part of the city, will use a Rapid Change Accumulator system, which accumulates the energy recovered during braking allowing the tram to run without an overhead power supply.

The Zaragoza tram is managed as a public service by a partially public owned company, 20% of whose shares are held by the Zaragoza City Council, while 80% are in the hands of TRAZA. FCC-ACCIONA joint venture was engaged to design and construct the project.

The public service management contract was awarded in July 2009, and construction began one month later, in August. Testing on line one was started in February 2011. These simulations, which were called ’empty-train test runs’, were continued until mid April.

Line one is 7.56km long, running from Mago de Oz in the southern suburb of Valdespartera. It is divided into two phases of approximately equal length. The first phase of Zaragoza’s tram line one was inaugurated in April 2011. The trials and testing were started in November 2010. The initial 6.4km section of the north-south route links Plaza Paraíso on Gran Vía with Valdespartera and has 13 stops. Phase two of the project connects Gran Vía to Parque Goya.

"The tram service will connect the historic and modern areas of the city."

Line one was extended further by 844m in December 2012 between the Plaza de España to César Augusto section and Plaza del Pilar. The extension of the network into the heart of the old city has also seen a further addition to Spain’s longest section of catenary-free tram route.

Line two from Las Fuentes to Delicias (Zaragoza) and line three from La Jota to Torrero are also planned to begin operations in 2015.

The trams will mostly use conventional catenary, but in the historical city centre between Plaza Paraíso and the Roman wall, they will use stored braking energy and additionally receive power during stops through the ACR system. No overhead wires will therefore be needed in the historic area.

The project was implemented by the TRAZA consortium. Hill was contracted to provide risk assessment, budget control, change management and project monitoring services during the system’s construction. Aimsun was contracted to determine the short and long-term impact of the new tramway on Zaragoza’s road network.

CAF has supplied a fleet of 21 Urbos 3 trams for operation on the Zaragoza tram network. The vehicles are 33m long and 2,650mm wide and have capacity to handle 200 passengers. The cars offer 54 seats and 146 spaces to stand.

Barcelona Metro Line 9 is set to become the longest automated metro line in Europe when construction work concludes in 2014.