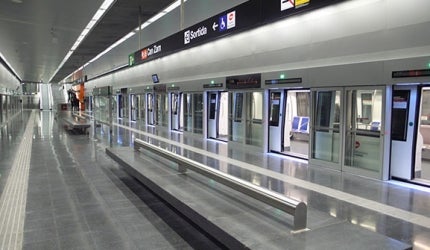 Barcelona Metro Line 9 is set to become the longest automated metro line in Europe when construction work concludes in 2014.

With an overall length of 47.8km and comprising 50 stations, Line 9 will connect various integral parts of Barcelona, such as the El Prat Airport, the ports district, medical and educational institutions, trade fairs and other popular destinations connecting the northern and southern suburbs.

Ifercat is the owner of the line, GISA (Generalidat deCatalunya) is in charge of the infrastructure and TMB is the operator. The new line is expected to serve 250,000 passengers daily and carry up to 165 million passengers yearly.

Details of Barcelona Metro Line 9 and its construction

"With an overall length of 47.8km and comprising 50 stations, Line 9 will connect various integral parts of Barcelona."

Line 9 will mostly run underground through a 12m-diameter tunnel, which will consist of two levels serving one direction each. Tracks will be layered one over the other, separated by an intermediate slab.

The project will include construction of new stations, tunnels, viaducts and other ancillary works. Elevators, escalators and staircases will be built in the stations to provide access to the platforms. Platform doors will be placed at all stations to enhance passenger safety.

Tunnels, which are being drilled using tunnel boring machines (TBMs) measuring 9.4m to 12m in diameter, are being dug between 30m and 80m below the surface.

Construction work is being carried out conforming to the Spanish legislation of ensuring fire safety measures along tunnels. Polymer reinforcement fibres are being incorporated into the precast lining segments for similar safety reasons.

Boosted by hosting the 1992 Olympic Games, Barcelona on Spain’s north-east coast has continued to grow in reputation and economic standing. Capital of the autonomous Catalonia region, Spain’s second-largest city had developed an extensive public transport operation featuring buses, funiculars, metro and, until closures completed by 1971 (save for the Tramvia Blau tourist service), a large tram system.

Rolling stock for Barcelona Metro line 9 will consist of 50 steel-wheeled trains of the Alstom 9000 series, each with five coaches.

Line 9 will connect six existing metro lines, six railway stations, El Prat Airport and the free portzone in the south-west and the Can Zam area in the north.

Siemens is playing a major role in the project by supplying Trainguard MT CBTC and VICOS CBTC, which is used for automatic traffic supervision, and the FTGS track circuits.

The Operation Control Centre, SCADA and communication systems are being provided by EMTE Sistemas. GPO was involved in providing certain construction management services for the stations, viaducts, tunnels and other areas. Ferrovial Agroman, through a joint venture, is involved in the construction and design of the project.

Static and dynamic structural load testing of the viaduct was carried out by Eptisa. Geological surveys and studies for the project were undertaken by SNC Lavalin. SENER provided technical assistance for Infrastructure and Systems Integration.

"The new line is expected to serve 250,000 passengers daily and carry up to 165 million passengers yearly."

Maccaferri is involved in providing Fibromac FR polymer fibres, including steel and polymer reinforcement fibres. TBMs used for drilling the tunnels are being supplied by Herrenknecht and NFM Technologies.

The contract to supply elevators and escalators is assigned to ThyssenKrupp Elavator, while Alco has been contracted to supply and install three lifts at Llefiá station.