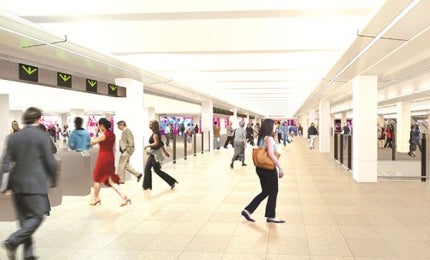 Located in Sydney, New South Wales, Australia, the Wynyard railway station will undergo a A$100m ($93.5m) upgrade to improve the punctuality of its train services. The project aims to overhaul the cluttered concourse and ticket area for the free entry, exit and movement of the commuters around the historic station.

The station will be equipped with new lighting, tiling and signage as part of the redevelopment programme. The project will include renovation works on the platforms and retail outlets. The planning approval for the project is expected later in 2014.

Located in the central business district (CBD) of Sydney, the Wynyard station is an underground Sydney Trains station and is a heritage and archaeological area. The station was opened in February 1932, as part of the Sydney Harbour Bridge opening celebrations.

"An underground Sydney Trains station, Wynyard station is a heritage and archaeological area."

The station acts as an important link for both the City Circle and North Shore lines and caters to more than 58,000 travellers every day. Following increased pedestrian flows to the station, new pedestrian ways were linked to the concourse areas in 1977, 1988 and 1994.

Wynyard Station was built on the site of the Wynyard Park, which was created in the 1840s’ as a public park on the former military barracks. The construction involved the excavation of the park, in order to build the station tunnels, platforms and related structures.

The station faces York Street and was built using a cut-and-cover method. After construction was completed in early 1932, Wynyard Park was restored over the new station and the Transport House was also built over the station, housing railway offices and administration.

Chief engineer for the city railway and Sydney Harbour Bridge JJC Bradfield designed the station, which features stairways with timber balustrades and ironwork banisters, remnant tiles and a layout reflecting the original 1930s’ station. The curved ceilings reflect the underground stations of the city circle line as at Museum and St James.

The station consists of a public concourse, a paid concourse and platforms, in addition to static and electronic displays showing train running times.

The platforms have ceramic tile flooring and are supported by riveted-steel columns and beams. The York Street entrance features the 1932 Otis L-type escalators, which have timber treads and are encased in timber veneer panelling.

North West Rail Link is a proposed rail line in Sydney that would connect Epping, The Hills Centre and Rouse Hill.

The station was originally constructed with six platforms, which are accessed through stairs and a recently installed lift.

Platforms 1 and 2 were built to serve the eastern pair of railway tracks across Sydney Harbour Bridge and used as a terminus for North Shore tram services, which operated over those tracks from the bridge’s opening in 1932 until 1958. After the removal of tram station in 1958 due to discontinuation of trams across the city network, the two platforms were converted into underground car parking areas.

Platforms 3 and 4 on the upper level, as well as Platforms 5 and 6 on the lower level, are open island platforms.

The station services the Sydney Trains-operated trains of a number of lines including the North Shore line, the Northern line and the lines served by the City Circle, namely the Bankstown Line, the Airport & East Hills Line, the Inner West Line and the South Line.
It sees 12 to 16 trains an hour each way, apart from additional trains during weekday peak hours.

The new 3.5m-long, 9m-wide underground pedestrian link will improve the entry and exit capacity of Wynyard Station to meet existing and future demands for the CBD’s western corridor.