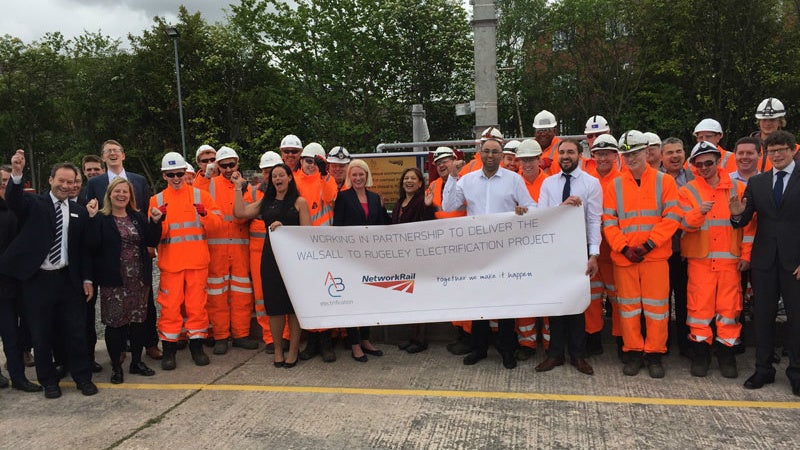 Network Rail began the electrification of the railway segment between Rugeley Trent Valley and Walsall on the Chase suburban railway line in West Midlands region in the UK in November 2013.

Expected to be completed by late 2017, the project will reduce the journey times by 15 minutes, and address overcrowding in trains by introducing more trains to Birmingham.

It will also free-up diesel-run rolling stock and introduce higher capacity electric trains that will carry more passengers. It is expected to create approximately 1,600 new jobs and bring about £110m ($199.82m) in gross value added (GVA) through regional economic benefits.

The Walsall to Rugeley line electrification project was announced in July 2012, and the UK Government approved its funding in July 2013. The project is estimated to cost £78m ($119.35m).

The project involves the electrification of 51km of single-track, as well as the construction of foundations, structures and a contact system. It will also extend station platforms to accommodate new longer trains, which will be introduced after the electrification.

Apart from electrification of the railway line between Walsall to Rugeley, it also involves speed increase from the existing 45mph to 75mph and enhancing the line to carry W10 freight containers.

Works on the electrification between Walsall and Rugeley Trent Valley project began with the demolition of the Broad Lane bridge at Bloxwich North station in November 2013. The early works included three bridge reconstructions.

The resignalling of the route was completed prior to the electrification work and immediately after the closure of three manual signal boxes located at Bloxwich, Hednesford and Brereton Sidings, along with the panel boxes at Walsall and Bescot. The West Midlands Signalling Control Centre located at Saltley took the area control during the signalling upgrade works.

The final stage of electrification began with the erection a mast at Walsall Training Centre in May 2016, which will be followed by inspection of reconstructed bridge structures along the route to Hednesford rebuilt to allow the electric trains to operate.

The work on erection of overhead cables over the rail line is expected to be completed by December 2017.

"The project involves the electrification of 51km of single-track, as well as the construction of foundations, structures and a contact system."

ABC Group is providing a piling train for the construction that includes the Kirov crane along with a piling rig. The final erection of the contact system wiring is also being provided by ABC Group’s wiring train and skilled teams.

SB Rail was contracted to provide the electrification piling train (EPT) system in October 2015. The EPT enables movement from stabling point directly into possession by reducing setup times and increasing pile loading possibilities. The EPT equipment was installed at 72 piles of varying lengths between 3.5m and 7.5m during a 54h possession.

Early works at the site included the construction of three bridges, the Walsall tunnel and parapet height upgrades under TSI compliance were provided by Amalgamated Construction (AMCO).

The contract for the construction of track lowering at 11 sites was awarded to Stobart Rail.