The MML electrification on Kettering and Corby section is expected to be completed by December 2019. Image courtesy of Network Rail.

The bridges and viaducts along the line will be upgraded to make them suitable for electrification. Image courtesy of Network Rail.

The electrification between Leicester, Derby/Nottingham and Sheffield is scheduled to be completed by December 2023. Image courtesy of Network Rail. 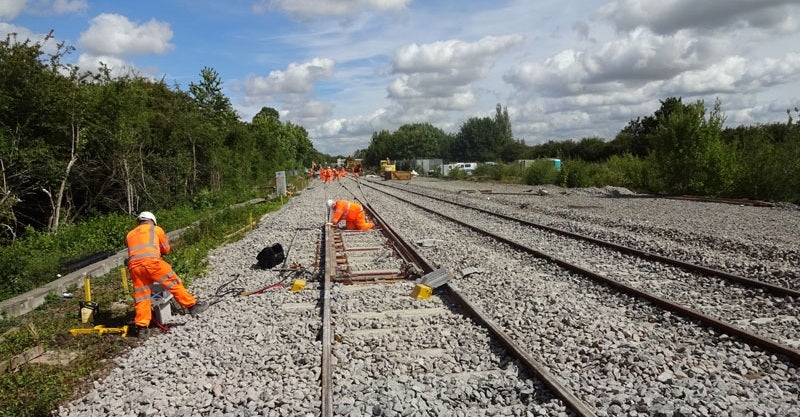 Network Rail and the UK Department for Transport initiated MML’s improvement in 2014, which includes electrification of the line, upgrading bridges and tunnels, remodelling the stations, and line speed enhancements.

"The electrification of another section of the MML located north of Kettering to Leicester, Derby/Nottingham and Sheffield is scheduled to be completed by 2023."

Opened in 1870, the Midland Main Line (MML) has 397 miles (639km) of track, 16 tunnels and 35 stations. Network Rail has initiated the MML improvement programme with an objective to increase the passenger capacity, reduce the journey times, and curtail the carbon footprint up to 11,000t by introducing greener trains through electrification.

The project will include electrification of 639km single track, erection of 12,500 overhead line equipment (OLE), establishing four national grid supply points, and 24 substations or distribution points along the line. The project will include modernisation of track and signalling systems, expansion of station platforms and introduction of new trains with more carriages.

The line will be electrified using a 25kV OLE design, including wires and supporting posts that will distribute electricity at 25,000V to power trains.

Network Rail began initial works of upgrading the tracks, which are necessary for instigating the electrification works, in 2014. The upgrades to the line include performing enhancement works to bridge parapets, strengthening railway embankments, and clearing the overgrown vegetation.

Construction on the line for electrification includes undertaking piling works to install the foundations for structures that will carry overhead lines, and installation of overhead line equipment.

The piling works between Kettering and Corby began in Kettering area in June 2015. The works are aimed at widening and strengthening the railway embankment to facilitate the existing line to be realigned and a second line to be installed.

The line between Kettering and Corby was closed for train operations between September and October 2016 to strengthen and carry out upgrade work on key bridges and viaducts along the route.

Contractors involved with the MML improvement

Atkins was awarded a contract to update the business case for MML electrification in 2014. The contractual scope included performing route enhancements, cost evaluation and rolling stock assessment. The company is also providing engineering design services for the electrification of the line.

Carillion and SPL Powerlines joint venture was awarded a €450m ($750.95m) contract for the electrification of the MML in February 2014.