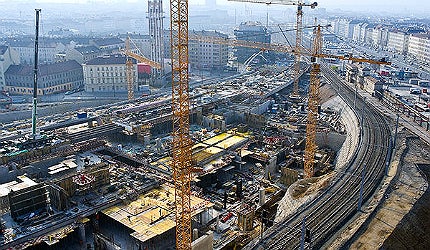 The station links four major railway lines, which meet at Vienna from four directions. It offers significantly improved connectivity across nations and also provides access to the Vienna S-Bahn, tramway and bus lines.

Vienna city council approved the construction of the new station building in December 2006. The environmental assessment for the rail infrastructure began in 2007.

The project involved the construction of a 20,000m² new station building and of a new Austrian Federal Railways headquarters building next to it.

It also included the development of a 109ha area surrounding the new station, with 5,000 residential apartments in Sonnwendviertel and 550,000m² of office space.

The estimated investment for the whole project is €4bn ($5.06bn). It was financed by ÖBB master plan, the community of Vienna, TEN-aids and ÖBB real estate revenues.

Design of the major Austrian station

The station features a 25,000m² diamond-shaped, translucent, glass and steel roof over the platforms. It is a transportation hub with 100km of new rails, in addition to 300 state-of-the-art switches and crossings.

The station is energy-efficient and environmental-friendly as it is designed to have integrated CO2-controlled ventilation and geothermal energy systems. The windows and walls of the station are soundproof.

Construction of the Wien Hauptbahnhof

Preconstruction works included alteration and modernisation of the facilities at the Südtiroler Platz station. These works began in June 2007. The S-Bahn and U-Bahn stations at Südtiroler Platz were connected in 2008.

"It replaced the old Südbahnhof terminal station. ÖBB-Infrastruktur is the owner of the project."

In November 2009, the main station’s construction started on the eastern plant, with excavation work undertaken for roads and logistic areas. The demolition of the old Südbahnhof station and the railway systems began in December 2009 and was completed in August 2010.

In 2011, construction of office buildings in the Belvedere district began. Construction of the new Austrian Federal Railways headquarters building and apartments began in 2011 and early 2012, respectively.

The joint venture of Arge Östu-Stettin and HOCHTIEF Construction was awarded a €5.9m ($7.40m) contract for the railway infrastructure. The scope of the contract includes construction of truncated east station, provisional east railway yard with a storage capacity of 3,320m and a bypass track.

Liebherr Group was awarded the contract to provide nine Liebherr 280 EC-H 12 Litronic tower cranes for the construction of the station building.

The diamond-shaped roof of the station was installed by UNGER Steel.

The new railway station has 16 tracks and 15 platforms, including five roofed platforms and ten platform edges. The width of the platform is 12.1m. The station has 100 shops and restaurants.

The passenger facilities include escalators and elevators, train information displays and waiting rooms. There is a parking garage below the station, with more than 600 spaces.

The central station allows passengers to change trains on the same platform. The new station is closer to Südtiroler Platz underground station than the former building and includes an underground walkway to connect the two stations.