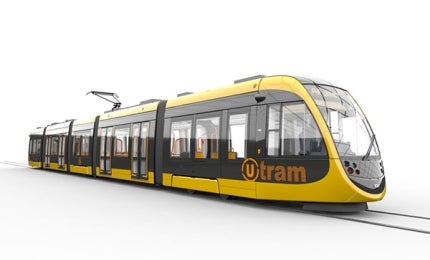 The Uithof Line project, known as Uithoflijn in Dutch, is a new light rail tram line that is under development in the city of Utrecht, Netherlands. The 8km-long line is an expansion of the Utrecht tram network and stretches between the Utrecht Central Station and the Utrecht University campus (De Uithof) in the east of the city.

The project is being commissioned by the Province of Utrecht and Utrecht municipality since January 2015. RegioTram Utrecht will manage the new line on behalf of the province.

Trams on the Uithof line will run at a maximum speed of 70km/h and will take 17min from the Utrecht Central Station to Science Park De Uithof, the last stop of the line.

Background to the Uithof tram project

The Uithof Line was planned to accomodate Utrecht’s rapidly increasing population. The city’s metropolitan area currently has approximately 650,000 inhabitants, which is expected to reach 800,000 by 2040. The number of people using public transport is expected to increase by 5% a year.

The future expansion of the Utrecht University is also expected to attract new organisations and companies, increasing the number of students and employees travelling on the line.

Utrecht has the busiest bus network in the Netherlands, impacting the air quality in the city. Studies have shown that the bus network has reached a saturation point and is no more a viable solution for the growing passenger traffic in the region. As a result, a tram network was seen as a more practical alternative public transport system as it can carry up to five times more passengers than a bus.

The BRU agreed to the ‘Tram Network 2025’ report in late 2009, which suggested a network of five tram lines in the Utrecht region. The final design of the Uithof Line was adopted in June 2013.

The new tram line will replace the existing bus line 12, which carries approximately 25,000 passengers a day. The Uithof Line will consist of nine stops and six sections designated S, A, B, U, T, and O.

The line starts from Utrecht Central Station, where it connects to the existing SUNIJ tram line between Utrecht and Nieuwegein / IJsselstein. It continues along the current bus lane and passes through seven stations, including Vaartse Rijn, Galgenwaard, Kromme Rijn, Padua Avenue, Heidelberg Avenue, UMC and WKZ to finally reach P + R Uithof.

Infrastructure along the Uithof Line

The BRU awarded the engineering and construction (E&C) contract for the Uitof Line to Royal BAM Group in December 2014. The contract entails the construction of the tram infrastructure including tram tracks, overhead lines and stops.

The line requires 12 coupled trams and three for backup and maintenance. The total length of the linked trams will be 65m. The platforms will have a length of 75m in order to be able to accommodate longer trams.

The BRU signed a contract with Spanish supplier CAF in January 2015 for the delivery of 27 low-floor Urbos 100 trams for the new line.

The bidirectional tram with five modules will have a driver’s cabin at each end and feature two motorised bogies, one trailer bogie and couplers for multiple operations.

The 33m-long, yellow and gray trams will have 62 seats and two wheelchair spaces to accommodate 216 passengers in total.

The project was proposed to improve public transport connectivity between Parramatta and other key destinations in the Western Sydney, Australia.

The trams will be fully air-conditioned and equipped with LED displays. Other equipment in the trams include exterior side cameras with rear-view mirror function, closed circuit video surveillance cameras, an event recorder and driver presence monitoring system, train control system and diagnostics, LED lighting, sanders and flange lubrication, a crashworthiness device and a radio-communication system.

The City of Utrecht and the BRU began the the tram project in 2011. The project started with the construction of parts of the substructure on which the tram line will ride.

Infrastructure planning and designing will take place in 2015 and the actual construction will begin by the end of 2015 or early 2016.The construction of tram tracks, overhead lines, stops and other infrastructure will be executed between 2015 and 2017. The first tram trains will be delivered to the Nieuwegein depot in early 2017 and trail operation will be conducted in mid-2017.

The tram drivers will receive safety training and the timetable will be tested, following which passenger service will begin in mid-2018.