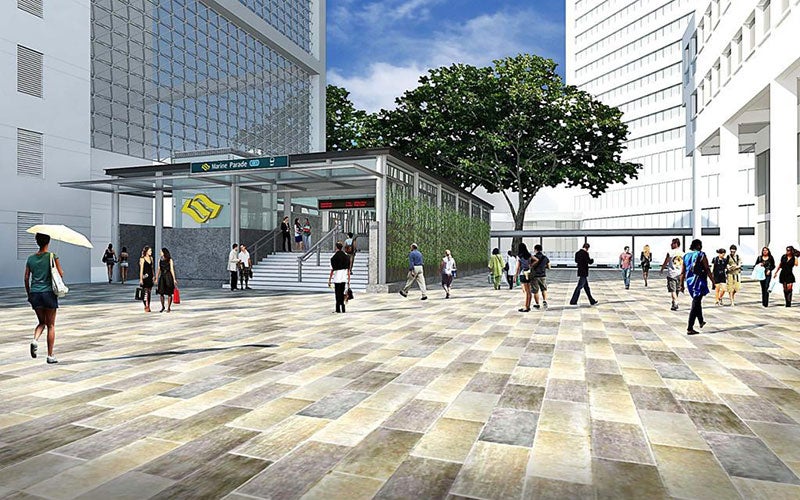 The Thomson-East Coast Line (TEL) is a new mass rapid transit (MRT) rail project under construction in Singapore. Announced by the land transport authority (LTA) in 2014, the project is a merger of two under-construction MRTs in the city, namely the Thomson Line (TSL) and the Eastern Region Line (ERL).

The 43km line will merge 30km of Thomson Line with 13km of East Coast Line, and will add 31 stations, including seven interchanges. The interchange stations will link to the East-West Line, North-South Line, North-East Line, Circle Line, and the Downtown Line.

TEL will be carried out in five stages, starting from 2019 and finishing in 2024. After all five phases have been completed, it will serve approximately one million commuters a day.

Ground for the construction of Thomson Line was broken in June 2014. The line will enhance rail connectivity in the north-south corridors of Singapore to the Central Business District (CBD) and developments in the Marina Bay area.

The East Coast section of the TEL includes a 13km stretch, which will connect the city centre with eastern parts, such as Tanjong Rhu, Siglap, Marine Parade, Upper East Coast, and Bedok South.

The first phase of the project will conclude in 2019 with three stations at Woodlands North, Woodlands, and Woodlands South. The second will finish in 2020 with six stations including Springleaf, Lentor, Mayflower, Bright Hill, Upper Thomson and Caldecott.

The third phase will provide direct access to the CBD and Marina Bay area, reducing the journey time from Woodlands South to Orchard to 35min, which is 15 minutes faster than the bus and existing MRT. 13 stations, including four interchange stations, will open in 2021.

Scheduled to open in 2023, the fourth phase will see development towards the east of the city, with seven stations from Tanjong Rhu to Bayshore.

The fifth and final phase of the TEL will finish in 2024, and introduce two new stations, including one interchange at Sungei Bedok.

Stations on the Thomson-East Coast line

Thomson East Coast Line will have a total of 31 stations, with 22 on the Thomson Line, and nine on the East Coast line.

The stations are being designed with more entrances and exits to allow free passenger movement. Some East Coast line entrances will be connected through underpasses up to 400m long to improve first and last mile connectivity.

The underground stations will protect commuters from bad weather, reduce walk times to and from the station, and improve safety for children and elders.

While Kawasaki designs the trains, its partner will be responsible for production of the train bodies and the final assembly.

The consortium will supply first-of-its-kind, fully automated, driverless trains for the project. The trains will have five doors on each side of a car to allow smoother passenger boarding. They will have improved electric current regeneration capability for energy savings and will be operated from the 750V DC third rail power supply system.

In February 2014, the LTA awarded three civil contracts for the construction of stations on the Thomson Line. The S$454m ($321m) contract for Bright Hill Station (formerly Sin Ming Station) was awarded to Penta-Ocean Construction, a Japanese construction company.

A construction contract for the Marina Bay station and its associated tunnels was awarded to Taisei Corporation for S$425m ($301m).

In May 2014, four more construction contracts were awarded at a combined value of S$1.13bn ($800m). The contractors include KTC Civil Engineering & Construction (Orchard Boulevard Station), and a JV of Tiong Seng Contractor and Dongah Geological Engineering (Great World Station and its associated tunnels).

In July 2015, three contracts for the construction of Thomson Line’s Orchard, Marina South and Gardens by the Bay stations and tunnels were awarded to Penta-Ocean Construction, Bachy Soletanche Singapore, Sinohydro Corporation, Sembcorp Design and Construction, and Nishimatsu Construction. These contracts had a combined value of S$1.32bn ($935m).

In November 2015, the LTA awarded the first civil contract to Samsung C&T Corporation for the construction of the Marine Parade station and its associated tunnels.