The Sungai Buloh–Kajang (SBK) Line is a proposed 51km long rail line that will connect Sungai Buloh, north-west of Kuala Lumpur, with Kanjang in the south-east.
SBK Line is part of the Klang Valley mass rapid transit project announced by the Government of Malaysia in December 2010.
Along with integrated bus services, the new line is expected to increase the use of public transport from 17% in 2011 to 50% in 2020. 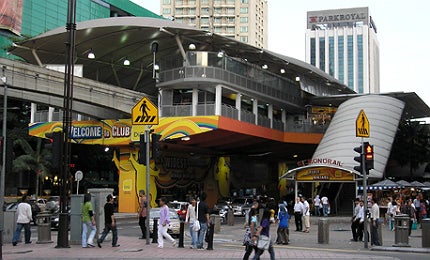 The Sungai Buloh-Kajang (SBK) Line is a 51km railway that will connect Sungai Buloh, north-west of Kuala Lumpur, with Kajang in the south-east, while passing through the densely populated centre of the federal capital.

SBK Line is part of the Klang Valley mass rapid transit project announced by the Government of Malaysia in December 2010.

It will be owned by the Government of Malaysia through Syarikat Prasarana Negara Berhad (Prasarana) and operated by RapidKL, a subsidiary of Prasarana.

Funded by the government, project construction began in April 2012. The first phase of the SBK Line began its operations in December 2016, with the second phase scheduled to start running in July 2017.

"SBK Line is part of the Klang Valley mass rapid transit project announced by the Government of Malaysia in December 2010."

The SBK alignment was proposed many times with different transport options, firstly in 2006 by Prasarana, and again in 2008 as a part of the Kuala Lumpur draft city plan to create rapid bus transport.

Feasibility studies performed since the first proposals revealed that bus transport could not address the growing traffic congestion, and proved costly when combined with rising petrol prices.

The alignment was subsequently proposed in July 2010 as an MRT system under the Greater Kuala Lumpur / Klang Valley national key economic area (NKEA). It was approved as the commuter train was economically feasible and could effectively tackle the traffic issues.

The final alignment was revealed by the government in July 2011, three months after the public consultation. It was drawn with an objective to minimise social and environmental impacts of the project.

The new alignment resulted in the removal of four stations from the original plan of 35 stations and reduced the land acquisitions from 100 to 40 buildings in the southern region. The four stations will be considered in future, depending on the passenger demands.

SBK line is being constructed on a project delivery partner (PDP) model to eliminate the risk of cost and time overrun and also to have a single point of accountability.

A 50/50 joint venture of Malaysia-based investment holding company MMC and infrastructure group Gamuda was appointed as the PDP in early 2011.

The project’s cost-benefit analysis was performed by McKinsey. It is expected to generate around RM3bn to RM4bn ($1.34bn to $1.68bn) revenue a year in the first five years of its operation.

The route will contain 9.5km of underground railway in the city centre and the remaining on the surface.

There will be seven underground stations, with four serving as interchanges connecting the KTM Komuter Line, Ampang LRT Line and the Kelana Jaya LRT Line. The Sungai Buloh railway station was designed based on the Bandar Tasik Selatan interchange station of the KTM Komuter and Ampang Line.

Trains travel at frequencies of 3.5 minutes during peak hours. They operate at a speed of 35km/h and will cover the distance between Sungai Buloh and Kajang in 88 minutes.

A fleet of 58 trains will run on the SBK line. Each train will have four carriages carrying a maximum of 300 passengers in each carriage.

Engineering, procurement, construction, and testing and commissioning (EPCTC) contracts for the transit system were awarded in October 2012. The contracts were divided into seven packages.

"The line will serve 1.2 million people in the Klang Valley who currently do not have an adequate rail network."

Packages one and two were awarded to a consortium of Siemens Malaysia and SMH Rail. The consortium is responsible for providing electric trains, depot equipment and maintenance vehicles.

Power Supply & Distribution System is provided by Meidensha Corporation under package five. The $274m package six has been awarded to Mitsubishi Heavy Industries to perform the track works for the transit system. A consortium of Apex Communication and LG CNS received the package seven contract to provide telecommunications.

The MRT awarded a $25m contract to ST Electronics to provide platform screen door systems for the rail line in April 2013.

A joint venture of Alcatel-Lucent and CMC Engineering won a contract to provide advanced communication system for the light rail network extension project in March 2013.

Stesen Sentral is a multimodal railway transit hub in Malaysia; the largest of its kind in Southeast Asia, covering an area of 9.3 acres.