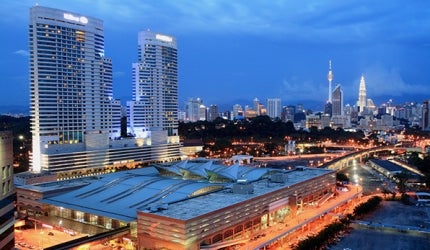 Stesen Sentral is a multimodal railway transit hub in Malaysia; the largest of its kind in Southeast Asia, covering an area of 9.3 acres. Stesen Sentral currently acts as the main railway station of Kuala Lumpur, integrating six different types of railway transits running in the capital under one roof. It is located within the Kuala Lumpur Sentral, an urban international business and residential development.

Opened in April 2001, the railway station was built to replace the 90-year-old Kuala Lumpur railway station. The new station offers passengers global connectivity and provides a link to the commercial, industrial and residential areas of Malaysia. It also provides a direct link to the Kuala Lumpur International Airport, Putrajaya (federal government administrative centre) and Cyberjaya. An investment of RM 1.1bn ($348m) was made to develop the station.

The railway station won many accolades and awards. It was awarded ‘best steel roof design’ and the FIABCI-Malaysia award of distinction in 2002.

"The new station offers passengers global connectivity and provides a link to the commercial, industrial and residential areas of Malaysia."

Once a site used for uploading goods to Malaysian national railway operator Keretapi Tanah Melayu (KTMB), the government privatised Stesen Sentral in June 1994 and awarded the authority for the new station’s operations and management to Kuala Lumpur Sentral, a consortium led by Malaysian Resources Corporation (MRCB).

Construction of the new railway station was based on a build-and-transfer model. The government in return will issue the development rights of the surrounding 72 acres of area to the consortium to construct commercial spaces around the transit hub.

The old Kuala Lumpur railway station, which served the city for almost 90 years, was closed with the opening of the Stesen Sentral. The daily ridership of the new station is around 100,000 passengers.

The Kuala Lumpur Sentral project covers an area of 72 acres and is situated at a strategic location, 1.5km from the city centre. It includes a multimode transit hub, business and corporate spaces, international hotels, commercial malls and luxurious residential areas. Stesen Sentral is central to the urban development project.

Light Rail came to Kuala Lumpur in 1998 with the creation of the first section of an automatic mass transit system, running from east to west across one of the fastest growing cities in the world.

The construction contract for Stesen Sentral, worth RM752.85m ($238m), was awarded to EKD Joint Ventures led by Dragages Malaysia.

Development of Stesen Sentral included the construction of a railway terminal, associated rail tracks, three commercial development decks, a maintenance cell and an access road. The work was only carried out during the night when power supply on the existing tracks was disconnected.

Construction on the marshalling yard with three electric railway lines was the most challenging aspect of the project. The railway tracks were initially diverted to another site nearby. After the construction of the terminal building they were relocated to the original site. These works were divided into several parts.

"The construction contract for Stesen Sentral, worth RM752.85m ($238m), was awarded to EKD Joint Ventures led by Dragages Malaysia."

The Putra Light Rail track project was also operational, which further increased the complexity of the project. The railway station currently has seven platforms of which two platforms serve KTM Komuter, one KTM Intercity, two Kelana Jaya Line, one KLIA Ekspres and one for KLIA Transit.

Commuters of the city can choose either KTM Komuter or KTM intercity trains from the station as these two services have an established link with most of the city. The ERL serves as the one and only direct link to the city’s international airport terminal. Kuala Lumpur Sentral future development

The other infrastructures surrounding the railway hub are being developed currently. These components are scheduled for completion in 2015 and will require an investment of RM 11.76bn ($3.7bn). Upon completion of the Kuala Lumpur Sentral project, the ridership of the railway station is expected to rise further.