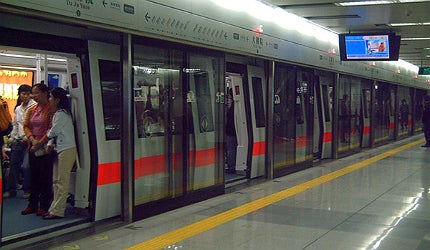 The rapid transit system in Shenzhen city was inaugurated in December 2004 and currently has five lines, with 131 stations. The system provides an economical and fast means of transport when compared to buses and taxi transport systems in the city. The system underwent rapid expansions and renovations in 2011, prior to 2011 Summer Universiade.

The whole of the rapid transit system has a length of 178.44km and has an annual ridership of approximately 460 million passengers. It is mostly operated by Shenzhen Metro Group (SZMC), whereas Hong Kong-based MTR Corporation (MTR Corp) operates a few segments.

The system currently has five operational lines. Proposals for expanding the system by five more lines were accepted in July 2011 and are expected to be completed between 2015 and 2018.

"The whole of the rapid transit system has a length of 178.44km and has an annual ridership of 460 million passengers."

Line 1 of the Shenzhen Metro, also known as LuoBao Line, stretches for 41.04km with 30 stations. It runs eastwards from Airport East to Luohu. It has the highest daily ridership among all other lines on the system. It was extended by 19.7km from Shenzhen University to Airport East, adding 12 additional stations, in June 2011. Part of the line runs underground and part is elevated.

Line 2, or Shekou Line, stretches for 35.78 km with 29 stations and is completely underground. First phase of the line stretching 15.5km from Chiwan in the southwestern suburbs to Window of the World, with 12 stations, was opened in early 2011. The second stage of the line constituting a 20.6km eastern extension from Window of the World Station to Xinxiu Station with 17 stations was opened to traffic in June 2011.

Line 3, or the Longgang Line, stretches 41.66km with 30 stations. First phase of the line stretching 25.7km with 15 stations was put into trial operations in January 2011. The section runs on an elevated track between Caopu and Shuanglong. The second phase of the line with an extension of 17km and 15 stations was opened to traffic in June 2011. The line now stretches between Yitian and Shuanglong.

Line 4, also known as Longhua Line, stretches 19.96km with 15 stations. Phase one of the line was opened in December 2004, whereas phase two was opened in June 2011. Futian Checkpoint and Qinghu are the terminal stations of the line.

Line 5 or Huanzhong Line stretches 40km in length with 27 stations. It was inaugurated in July 2011 and runs from Qianhaiwan on Line 1 across the north of the city to Haungbeiling on Line 2. Qianhaiwan and Huangbeiling are the terminal stations of the line.

SZMC was established in July 1998 to build the Shenzhen Metro. The ground breaking ceremony of the project was held in December 1998.

Phase one of the project constituted construction of the east section of LuoBao Line and the southern section of Longhua Line. The total length of phase one was 21.86km, with 20 stations. The phase one was completed and opened to public use in December 2004. It involved an investment of approximately $1.86bn.

The Line 1 extension from Shijiazhichuang to Bao’an International Airport was started in March 2006. A $1.5bn contract was awarded to China Railway Group for the construction of Line 5 in November 2008.

MTR Corp entered into a 30-year agreement with Shenzhen Municipal Development Planning Bureau for the construction of second phase of Line 4 (Longhua Line) on a build, operate and transfer (BOT) basis. The BOT agreement was signed in March 2009 and in August 2010 the southern section of Longhua Line was transferred to MTR Corp.

Trial operations on Lines 2 and 3 of the Shenzhen Metro began in December 2010. The phase two of metro expansion, which constitutes an additional length of 100km, was inaugurated in June 2011. It included a 23.6km extension of the LuoBao Line and construction of 35.78 km SheKou Line and 40km HuanZhong Line.

A phase three extension of the Shenzhen Metro system is also being planned. The planning and preliminary studies on Lines 7 and 11 have already been completed. Work on Line 7 of the transit system was started in October 2012. The new line stretches 30.2km between Lishui Station in Nanshan and e Tai’an Station in Luohu. The $3.2bn line extension will have 28 stations and is expected to be completed by 2016.

In November 2001, a joint venture of Bombardier and Changchun Car Co of China, was awarded with a $133.48m contract to supply 19 six-car train sets for the Shenzhen Metro. Västerås supplied traction equipment for these trains.

A domestically designed first of its king A-type metro car was manufactured at CSR Zhuzhou Electric Locomotive Co in November 2008. The lightweight (less than 52t) cars consume less power and are equipped with latest passenger information, security and safety systems. These are used on Line 1 of the rapid transit system.

The Shekou and Huanzhong Lines use a 2.4GHz frequency Casco CBTC system.

Hangzhou, the capital city of Zhejiang Province, is the tenth most populous city in the Republic of China with an estimated population of 8.7 million (2010).