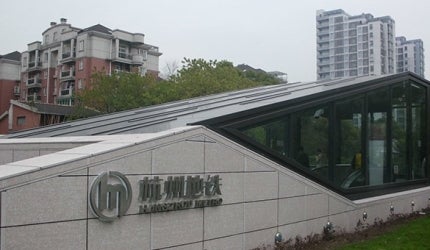 Hangzhou, the capital city of Zhejiang Province, is the tenth most populous city in the Republic of China with an estimated population of 8.7 million (2010) citizens. To avoid traffic congestion and provide an alternative transport link to citizens, the Chinese Government proposed the construction of a rapid transit system in the city.

The Hangzhou Metro network will include 13 lines, stretching 375km by 2050. Of the 13 planned lines, ten are expected to be completed by 2020. The metro will form 40% of the city’s public transport.

The project started with the construction of the $3.53bn (CNY22bn) Line 1 in 2007. A 48km section of the line, including 31 stations, was officially inaugurated in November 2012, while the 6km-long second section, including three more stations, became operational November 2015. Completion of the line was delayed after a tunnel collapse incident occurred a year after construction started. The incident led to the death of 21 people and injured another 24.

"Around 48 trains will serve the line at intervals of ten minutes during the day time."

Line 1 is operated by a joint venture of Hong Kong-based MTR Corporation and Hangzhou Metro Group (HMG) for 25 years under a public-private partnership (PPP). MTR Corporation holds a 49% stake in the PPP, with the remaining 51% being held by HMG.

The average daily ridership of the Line 1 was approximately 520,000 passengers in 2016. Around 48 trains serve the line at intervals of ten minutes during the day time.

The first phase of the project, which features construction of Line 1, Line 2 and a section of Line 4, started in March 2007.

Line 1 extends from Xianghu to Linping and Wenzelu. The total length of the line is 43km, of which 41km runs underground. It passes through popular centres of the city such as Wulin Square, Hangzhou Railway Station and the South Bus Station. The line incorporates complex technology, helping it to run underneath the Qiantang River, Grand Canal and the West Lake.

The Line 2 is 49km-long, starting at Langzhu in the west and passing through West Lake, Shangcheng District and Jiangnan Cheng. Construction started in 2011 and is being built in phases. The first part includes the assembly of 33.69km of the line with 26 underground stations. It is divided into two sections; the south-east section is 18.66km and the north-west section is 15.03km-long.

The 35km-long Line 3 will stretch through the districts of Gongshu, West Lake and Shangcheng. It will pass through Tianmushan Lu and West Bus Station to the Wulin Square and have an interchange with Line 1 at Ouhuazhou Dajie.

Far from dawdling with technology, China is making rapid moves to improve railway transport within the country. It has embarked on two ambitious high-speed railway lines using conventional steel wheels and rails.

Line 4 will be 15km-long, starting at Pengbu Town, stretching through Xintang Lu, Fuchunjiang Lu and across Qianjiang New City (CBD) and terminating at Qianjiang Bridge. It will have interchanges with Line 1 and Line 2 at East Railway Station and Qianjiang New City, respectively.

Line 6 will stretch 25km, serving Binjiang Hi-Tec Development Zone and Qianjiang Cultural Industry Park. It will have interchanges with Lines 1, 2 and 5.

Line 8 will be 18km-long, linking Jiangdong with the Xiasha District. It will have an interchange with Line 1.

In October 2009, a $0.28bn (CNY1.8bn) contract was awarded to CSR Nanjing Puzhen to supply 48 six-car trains for operation on Line 1 of the metro network. The deliveries were completed by 2013.

The aluminium-bodied Type B cars are China’s first cold-resistant metro cars and are equipped with heating devices. Each metro car is 120m-long, 2.8m-wide and can travel at a speed of 35km/h. The entire six-car train set has a 2,036 passenger capacity.

MBD Design was awarded a sub-contract by CSR Nanjing Puzhen for styling the interiors and exteriors of Line 1 rolling stock.

A $78.08m (CNY488m) contract was awarded to Eastern Communication for the supply of telecommunication and control equipment for Line 1.

In October 2012, Ansaldo was awarded a contract for the design and supply of communications-based train control (CBTC) signalling system for Line 2.