A joint venture of Transdev and RATP Dev (VTRA team) 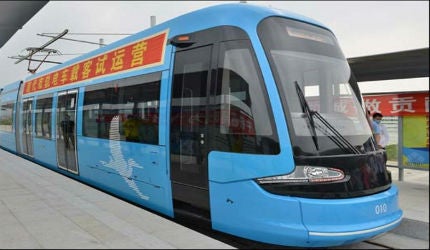 Shenyang tramway system was opened for public in August 2013 during the 12th China National Games. The 70km-long tram line covers 65 stations and handles 150,000 passengers per day.

It is expected to serve about 7.2million residents of the Shenyang city, capital of Liaoning Province. The Shenyang Metro project is also under construction in China.

The construction of China’s first modern tramway was started in February 2012. The tram network is 51% owned by Shenyang’s city government, while the remaining 49% is owned by VTRA, a joint venture of Transdev and RATP Dev.

The VTRA team was selected to operate and maintain the tramway network for the next three years under a CNY330m ($53m) contract signed in April 2013.

The Shenyang Tramway system consists of four lines. The Lines 1, 2 and 5 became operational in August 2013.

Details of the Shenyang trams

The Shenyang trams are nicknamed as dolphin trams because of their dolphin-shaped body design and blue colour. They are designed for a speed of 80km/h.

The trams feature two roof-mounted air-conditioning units and under floor heating coils to keep warm temperature inside. A super capacitor is installed to prevent staggering of electric wires over a way crossing.

The trams feature five cars each, with four door sets, 350mm high floors and a minimum curve radius of 19m. Each tram, with 65 seats and number of wheelchair spaces, accommodates 300 passengers.

The tram network is planned to be expanded with two future lines, Line 6 and Line 4. The Line 6 is under construction, while Line 4 is being reviewed.

Voith Turbo, a division of Voith, supplied 50 electric drive systems for the trams under a contract awarded in September 2012.

Buero-staubach provided interior and exterior designs for the trams.

The Changchun Railway Vehicles Company, the rolling stock manufacturer that is part of China CNR Corporation, supplied 30 trams for the Shenyang tram network.

The Government of Shenyang is constructing the biggest subway project in Liaoning province, north-east China.