Expand
Salzburg Central Station is a terminal station located in Salzbur city in Austria. Image courtesy of Herbert Ortner.
Austrian Federal Railways (ÖBB Infrastruktur AG) is the owner and operator of the station. Image courtesy of Linzer.
The old Salzburg Central Station had eight dead-end platforms and five through platforms.
The old ticket hall’s reconstruction was completed in 2010. 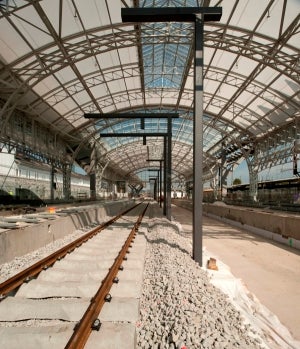 Salzburg Central Station, also known as Salzburg Hauptbahnhof, is owned and operated by Austrian Federal Railways (ÖBB Infrastruktur), and serves around 25,000 passengers in a day.

The station began reconstruction in 2008 and was officially opened in November 2014. It improved the West-East connection and integrated the station more effectively into the trans-European transport network from Paris and Stuttgart via Vienna to Bratislava.

"The station began reconstruction in 2008 and was officially opened in November 2014."

Salzburg Central Station was first opened in 1860 and was laid out as a transit station, which connected Hauptbahnhof with Europe’s international railway network. It was partly rebuilt as an island station in the 1900s, with an additional building constructed next to the station to accommodate domestic traffic lines. In 1909, more rail links were connected to the station, which converted it in to a transportation hub.

During the Second World War, the station and its tracks were destroyed partially by American naval aircraft raid bombing.

The old station had eight dead-end platforms and five through platforms. Being a terminal station for many trains, it had inadequate passenger access. With growing passenger traffic, it was decided that the station should be remodelled and reconstructed to enable more trains to pass through.

Vienna Central Station, also known as Wien Hauptbahnhof (Vienna Main Train Station), is the largest railway station under construction in Vienna, Austria. It will replace the old Südbahnhof terminal station. ÖBB-Infrastruktur is the owner of the project.

The project involved rebuilding the Nelböck viaduct, as well as two more crossing objects, rails and platforms. It also included construction of a spacious passage and steps to preserve a historic hall over the platforms for heritage protection. The cost of the project was €250m ($311m), of which the province of Salzburg contributed about 10% of the cost.

Construction began in November 2008 and was complete by October 2014. It included excavation of 300,000m² of soil to make room for a pedestrian underpass. The underpass provides access to the platforms, in addition to connecting the districts of Elisabeth-vorstadt and Schallmoos with the station.

"The new station was designed by Kadawittfeldarchitektur. "

Train services were continued during construction, while the ticketing hall, automatic ticket machines, restaurant and other passenger facilities were temporarily relocated to the shipping containers located on forecourt in 2009. New access paths were designed to the platforms, with a new ticket hall complete in 2010.

The new station was designed by Kadawittfeldarchitektur. In 2009, HOCHTIEF Construction was awarded a €50.5m ($63.63m) contract for the construction of bridges, a 100m underground crossing below auxiliary bridges and 3,200m platforms. It also included demolition of existing buildings, construction of a central arcade, and rail and platform supporting structures and earthworks.

BGG Consult was contracted to provide geotechnical and hydrogeological services for the station reconstruction project. Zaman was awarded the refurbishing contract. The concourse integrates around 2,500 parts with a weight of 250t, length of 79m and width of 24.6m.