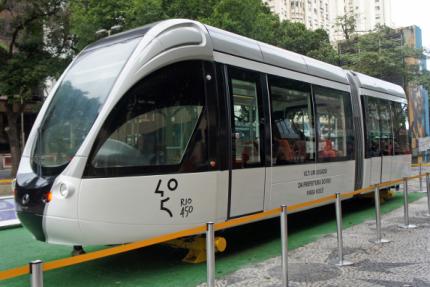 Salvador Metro is an under-construction metro system in the city of Salvador in Bahia state, Brazil.

Construction on the $450m catenary-free six-lane tramway began in the second half of 2013 and was completed on time for the Rio 2016 Summer Olympics. The total capacity of the tramway will reach 285,000 passengers a day, once all lines are fully operational.

Construction of the light rail is part of the Porto Maravilha (Marvelous Port) project, which aims to transform the neighbourhoods by revitalising an area of five million square metres. New roads, tunnels and expressways are planned to be built as part of the project.

Pedro Ernesto Street in downtown Rio and an old tunnel at the foot of Morro da Providencia was reurbanised by the tramway.

The VLT Carioca consortium was created in May 2013 and a 25-year concession agreement to establish a PPP with the municipality of Rio de Janeiro was signed in June 2013. The consortium is responsible for the construction of the LRT system, acquisition of rolling stock and associated systems, and operation and maintenance of the system for 25 years.

The light rail system connects downtown Rio and the Port Region through six lines and 42 stations. It has stops at important areas, including Novo Rio bus terminal, Santos Dumont local airport, Central do Brasil and Leopoldina train stations and Barcas ferry terminal, which aims to reduce the flow of buses and ease traffic congestion.

Line 1 links Cordeiro de Graça and Praça Mauá with Cidade do Samba 2 and Praça Santo Cristo, whereas line 2 runs from Central to Cidade do Samba 2. Lines 3 and 4 connect Central with Santos Dumont Airport and Cinelandia respectively.

“Lines 3 and 4 will connect Central with Santos Dumont Airport and Cinelandia respectively.”

Line 5 originates at Media Village and passes through the Baron of Mauá, São Diogo, and Nabuco de Freitas before terminating at Central, while line 6 connects Media Village with Cidade do Samba 2.

Construction of the catenary-free tramway in Rio De Janerio

Works on the two tunnels to be used by the trams were completed by mid-2013, while the actual construction on the LRT system began in the second half of the year.

Tracks of 15km arrived in August 2014 from Belgium, while the remaining were delivered later. Approximately 400m of track was installed on General Luiz Mendes de Morais Street in Santo Christo district in March 2015.

The Rio LRT system is served by 32 Alstom Citadel tram cars, which are 3.81m-high, 44m-long and 2.65m-wide and have a capacity of 415 people each. Four of the 32 cars are manufactured in France and the remaining 28 are manufactured in Taubate, Brazil. The vehicles run at an average speed of 17km/h.

The catenary-free trams receive electricity from an underground aesthetic power supply (APS) system installed at the stops. An energised third rail is installed at the stations for this purpose. The solution creates no impact on the local landscape and avoids visual pollution.

“The solution will create no impact on the local landscape and avoids visual pollution.”

Financing of the Rio LRT

The Rio LRT project received $245m funding under the Brazilian Federal Government’s Growth Acceleration Program (PAC), while the remaining is financed through the PPP.