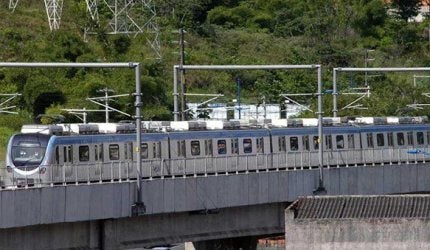 Salvador Metro is an under-construction metro system in the city of Salvador in Bahia state, Brazil. The first section of line one was finished and became operational in June 2012, while line two is expected to be completed by 2017. The first phase of the line 1 was completed in June 2014, just in time for the FIFA World Cup.

The project is sponsored by the Federal government of Brazil as well as the state government of Bahia, and is operated by CCR (Companhia de Concessões Rodoviárias) Metrô Bahia, which is a consortium of Spanish companies Construcciones y Auxilar de Ferrocarriles (CAF), ICF and Dimetronic.

The Salvador metropolitan area has a population of around 3.5 million, making it the seventh most populous city in Brazil. The new metro, upon completion, is expected to serve an estimated 300,000 passengers a day.

The Salvador metro is being built with the aim of improving the urban mobility for the FIFA World Cup in 2014. It also aims to improve the quality of public urban transportation in the Salvador area by connecting to low-income neighbourhoods.

The estimated total cost of the project is $1.73bn, which is financed under a public-private partnership by the World Bank, and Federal and Bahia state government. It is being completed through a build, operate and transfer (BOT) scheme.

The length of the Salvador metro will be 36.4km and it will include 19 metro stations. Line one of the metro connects Lapa city to Rótula do Abacaxi, via the Fonte Nova Stadium, which is built for the World Cup. It also includes a junction between the main avenues of Salvador with the busiest highway BR-324.

Line 2 will connect Rótula do Abacaxi to Aeroporto-Lauro de Freitas. It will also pass through Salvador International Airport, with a new airport metro station.

The construction of 11.9km line one began in April 2000. It was initially scheduled to be completed by 2003, but postponed first to 2008 and then further to 2012 due to delays. Just a 6.6km section of the line was completed by 2012. In January 2012, testing on 6.6km section was initiated. In June 2012, the commercial services on line one between Lapa and Acesso Norte began with four stations.

The Brazilian light rail operator Metrofor is modernising its existing rail network in the city of Fortaleza. The project aims to provide a reliable and comfortable rail service to the population of Fortaleza, Caucaia, Marazion and Pacatuba.

The remaining 5.65km section of line one with three more stations is partially completed and is expected to be fully completed by 2015. Trial runs began on the 7.3km section between Lapa and Retiro in June 2014. The cost of construction of line one was estimated at $307m. It was financed with $150m by the World Bank, $40m by the Federal government of Brazil and $67m by the Bahia State. The line’s construction included 1.2km of tunnel, 4.7km of elevated levels and 5.8km at-grade track.

The second line’s construction is expected to begin by the end of 2014. The line will include construction of a 24.2km track between Lauro de Freitas and Bonocô avenue in Salvador, and 13 stations. In July 2012, the Bahia state began a consultation process for the metro’s second line.

A public-private partnership concession agreement was signed between Bahia state government and CCR Metrô Bahia in October 2013, to construct the Line 2.

Signalling and communications at Salvador Metro

"The trains, with a capacity to accommodate up to 1,250 passengers, run at an average speed of 37km/h."

The metro line has an international standard gauge with 3kV of overhead power supply. The aerial catenary contract for line one of the metro was awarded to a consortium of Siemens, Camargo Corrêa and Andrade Gutierrez.

The metro line uses 11 four-car trains initially. The trains, with a capacity to accommodate up to 1,250 passengers, run at an average speed of 37km/h. Hyundai Rotem supplied six four-car trains for line one in 2008.

A consortium of Hyundai Rotem and Iesa will manufacture another 49 four-car trainsets under an order placed by CCR in February 2014. The cars will be assembled at Iesa’s Araraquara plant, while some of the components will be manufactured in South Korea.

Egis will work in-cooperation with MCA to provide systems engineering services for the metro, under a €12m ($16.4m) engineering contract awarded in January 2014.