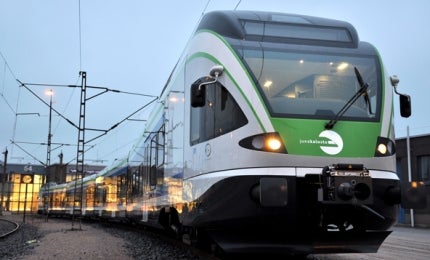 The Finnish Transport Agency, the City of Vantaa and Finavia are the joint developers of the Ring Rail Line project. The railway line provides public transportation to approximately 200,000 commuters.

The Ring Rail project combines the Martinlaakso line with the Helsinki-Lahti rail line via a short stretch of the Helsinki-Turku line before connecting to the old Helsinki-Hämeenlinna-Tampere rail line.

The new line passes through an 8km-long twin tunnel via Ruskeasanta groundwater area and cross the Päijänne tunnel closely. The twin tunnel starts from the north-east side of the Katriinantie-Tikkurilantie intersection and resurfaces in Ilola, to the east of Laaksotie and south of Koivukylänväylä.

All the stations feature 230m-long platforms. All the surface stations are accessible by covered stairs and lifts, while elevators are provided additionally at Kivistö station. Approximately 14,000 passengers a day are expected to access the new stations in 2025.

The project also includes the construction of 38 bridges. Park & Ride facilities for 700 cars and 840 bicycles were created during the initial phase of the project.

Passengers from the north have an option to change trains in Tikkurila, while the trip from Tikkurila to the airport takes only eight minutes. The line provides a direct link to the airport for ensuring the passengers to reach the airport from Helsinki city centre within 30 minutes.

The FLIRT SM5 train is 75m-long and has seating capacity for 232 people. The passenger and driver compartments of the train are completely air-conditioned. The trains have six doors on each side for fast entry and exit of passengers. The operating speed of the trains is 120km/h.

The project was completed at a cost of approximately €750.m ($824m), of which the Finnish Transport Agency contributed €474m ($565m), and the City of Vantaa and Finavia contributed €234.5m ($280m) and €30m ($35m) respectively. The project was also co-financed by the European Union under the Trans-European Transport Network (TEN-T) programme.

Pöyry was contracted to conduct general planning and environmental impact assessment for the project. The contractual scope also included detailed design of the access tunnels and rock excavation design for the underground stations.

The Boston GLX project primarily involves the extension of the Green Line, the oldest light rail transit in the US.

ISITC Tunnel Construction was contracted for grouting, blasting works, installation of rock bolts, and for complete recording of all the works related to the tunnel.

WSP was selected by Finnish Transport Agency for providing planning services for the rail track, stations and bridges for the Ring rail line. The contract also included railway design, geotechnical engineering, structural and bridge design services, along with the design of service roads and intersecting streets.