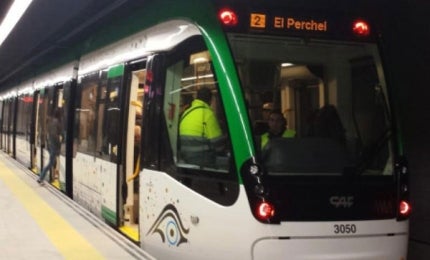 The two lines with 17 stations are expected to have an annual ridership of 17.1 million passengers, which is set to exceed 20 million by 2018 after the network is extended to the city centre.

A six-line light metro network was proposed as part of the Intermodal Transport Plan for Malaga in 1999. The Andalusia government started planning for the development of two lines of the proposed network in 2002 and signed a collaboration agreement with the Malaga City Council in the following year.

"The two lines are expected to have an annual ridership of 17.1 million passengers, which is set to exceed 20 million by 2018."

In 2004, the consortium led by FCC was awarded the contract to design, construct, acquire rolling stock and operate the network for 35 years.

Construction for the project started in 2006 and the first two lines of the metro starting from Andalucía Tech and Palacio de los Deportes and converging at El Perchel were completed by June 2014.

However, the two lines comprise 81% of the planned network under the first development phase of the broader metro network. The remaining 19% of the network includes the under-construction El Perchel-Guadalmina section, which is scheduled for completion in 2017, a 295m-long underground section from the Guadalmina station to the Atarazanas station in the city centre and a 1.8km overground track extension of Line 2 from Guadalmina towards the Hospital Civil situated north of the city centre.

The Ministry of Public Works and Housing of the Government of Andalusia launched tender for the infrastructure works required for the Guadalmina-Atarazanas section in July 2014. The remaining sections of the planned network are scheduled for completion by the end of 2017.

Details of Malaga Metro Lines 1 and 2

The Line 1 runs for 6.7km from Andalucía Tech to El Perchel, a neighbourhood in the Centro district of Malaga, located on the right bank of Guadalmedina. The 4.5km-long underground section of the line comprises 11 stations, including the El Perchel station that is shared with the Line 2. The section provides easy access to Theatines campus, the City of Justice and Carlos Haya Hospital.

The Line 2 runs 4.6km along the coastal belt from Palacio de los Deportes to El Perchel and is completely underground. It has seven stations, including the one shared with the Line 1 and provides easy access to populated places such as Carretera de Cádiz and the Jose Maria Martin Carpena Arena.

The two lines converge at the Perchel station, which offers access to Renfe’s AVE high-speed commuter rail service, as well as the intercity bus centre.

Malaga Metro’s Phase 1 includes 12 underground stations and five that are located at street level. The design of the stations is based on the advanced criteria for accessibility, ergonomics and optimum mobility flows. Surveillance cameras, passenger information panels and automatic ticket vending machines are placed in the stations for security and passenger convenience.

The underground stations are designed to provide direct access from the street level using elevators and escalators. The stations feature glass partitions on the edge of the platforms. The platform doors are aligned and synchronised with the train doors to avoid the risk of passengers falling onto the track.

Malaga Metro uses 14 CAF Urbos 3 tram units, each capable of accommodating 221 passengers. CAF Urbos 3 trams, which are also used by the Zaragoza tram network in Spain, goes up a speed of 70km/h and are equipped with triple braking system, which includes an electric brake on the engine, as well as mechanical and electromagnetic brake axles on the rail track.

CAF Santana was awarded a €41m contract to deliver 14 Urbos 3 tram units for the Malaga Metro.

The signalling system used in the first two lines of the metro is based on Alstom’s Urbalis 400 communications-based train control (CBTC) solution. Urbalis 400 uses wireless communication technology and automatic train protection (ATP) system to enhance operational efficiency by increasing the number of trains per hour while enabling a swift response to any incident.

The Vienna Metro began in the 1970s and has steadily expanded to constitute five lines with a total length of 78.5km.

Alstom delivered this signalling system for the two lines of the metro under a €15.4m contract awarded in 2006.

The total investment for the light metro network planned in the first phase is estimated to be €762m. European Investment Bank granted a 20-year, €325m loan for the project, while the remaining came from the Government of Andalusia and the Malaga City Council.

A joint venture between Vimac and two other companies was awarded a €153m contract for electrification and electromechanical installations that include the installation of six traction substations and corresponding distribution and interconnection centres (CDI’s), 18,500m of rigid catenary for the underground section, as well as the installation of elevators, escalators and ventilation systems.