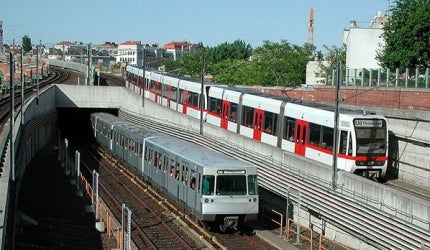 The first phase of expansion of Vienna metro rail was carried out during 1969-1982, encompassing Lines U1, U2 and U4. The second phase of expansion on lines U3 and U6 got underway immediately afterwards, with the work completed in 2000. The third phase commenced in 2001 and work progressed over the next nine years.

"Upon completion of the fourth phase of expansion, the Vienna U-Bahn metro network will be 89km long, across 116 stations."

Upon completion of the fourth phase of expansion, the Vienna U-Bahn metro network will be 89km long, across 116 stations.

The fifth phase of the Vienna metro expansion is still in the planning stage with prevalent uncertainty due to the availability of funding.

Lines U1 and U3 were extended up to Leopoldau and Stadion, respectively, as part of the third expansion phase. Strabag is currently carrying out extension work on Line U1 up to Altes Landgut and Troststrasse, which will be completed by 2016.

Line U2 of the metro rail network was extended by 4.5km from Aspernstrasse to Stadion and became operational in October 2013 as part of the first project of fourth phase expansion. The extended line includes three new stations and has an interchange with Austrian Federal Railways’ Stadlau – Marchegg line at the new Aspern station.

Strabag is currently carrying out extension work on Line U1 up to Altes Landgut and Troststrasse, as part of the second project of fourth phase expansion, which will be completed by 2017. It will be a southward extension to Oberlaa involving five new stations.

Vienna Central Station, also known as Wien Hauptbahnhof (Vienna Main Train Station), is the largest railway station under construction in Vienna, Austria. It will replace the old Südbahnhof terminal station. ÖBB-Infrastruktur is the owner of the project.

All the over-ground metro stations have been constructed to minimise noise levels within the premises. Bird-resistant glass has been used in construction of the station buildings. Plenty of space has been provided for parking bicycles, at all stations. Measures are being initiated to provide convenient links between the stations and the cycle and foot paths.

Signalling and control of the Vienna metro lines

Siemens has deployed its electronic interlocking systems and Siemens Computer Aided Signalling Element Control Computer (Sicas ECC) along the U1 and U2 lines. The Sicas ECC facilitates optimisation of train sequencing based on passenger traffic, in addition to enhancing the safety of the subway.

Siemens also provided the signalling and control systems for the extended U2 Line between Schottenring and Stadion, as well as the Kagran to Leopoldau extension on Line U1. The systems are also being installed on the extension between Stadion and Aspernstrasse that is currently under construction.

Siemens was further awarded a contract to modernise the signalling system on the U4 line. Works under the contract worth €40m ($54.4m) will be completed in stages from 2016 to 2019. It will include installation of a modern automatic train control system and commissioning of new interlockings.

Wiener Linien awarded $118m of tunnelling, civil and ground engineering works contracts to Strabag in May 2012, for sections nine and ten of the Line U1 extension.

The contracts form part of extending the Line U1 up to Oberlaa, from Reumannplatz. The thickly-populated zones of Per-Albin-Hansson-Siedlung housing estate will be directly connected to the city centre, upon completion of the project.

Strabag was also responsible for the construction of the Line U2 extension completed in 2013.

Siemens is supplying 44 Class V six-car train sets, as part of the fourth phase of the metro expansion. The Class V train sets will replace some of the existing U metro train sets that have been used for the past four decades. Out of the 62 Class U train sets, 21 will continue to run, however. The Class V trains are operational on U1, U2, U3 and U4 lines.

In addition, Class T and T1 trains that are powered by overhead traction are currently running on Line U6. Another 20 of the Class T1 train sets will be bought from Bombardier, to minimise the congestion on Line U6.

The State of Austria has provided half of the entire funding needed for the construction of the metro lines. The current funding agreements are only up to the fourth phase expansion.