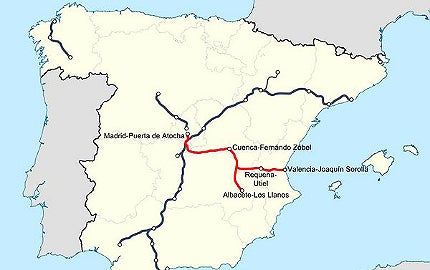 Spain has the longest high speed railway network in Europe and the second highest in the world, after China. The country’s total network accounts to 2,665km, with five dedicated lines. These lines establish high speed links between the largest cities of Spain and the capital city of Madrid.

The Madrid-Levante high speed rail network is one such network, which connects the capital city to the Mediterranean coast. The 955km high speed track is being built at an estimated cost of €12.5bn ($15.68bn), making it the most expensive railway project ever undertaken in the country.

The network is designed for operation at speeds of 300kmph. It consists of a number of sections and is compatible for both passenger and freight operations.

The Albacete-Alicante section is scheduled to open in 2012. The section between the cities of Murcia and Castellon is scheduled for opening in 2015. Opening of the last section, that stretches to Cartagena, is yet to be scheduled.

The European Union is providing a financial aid of €1.95bn ($2.45bn) towards the railway project. European Investment Bank (EIB) is also funding the project.

The line starts from Puerta de Atocha station and heads towards Cuenca and Motilla del Palancar. A branch line, which stretches to Valencia and Castellon, emerges from the main line at Cuenca. The main line heads towards Albacete and La Encina.

"The Madrid-Levante high speed rail network is one such network, which connects the capital city to the Mediterranean coast."

At La Encina the line branches into different sections. A section of these branches connects to the Mediterranean Corridor through Barcelona and Almeria.

A stretch from here heads towards Jativa and Valencia, and stretches towards the south-east up to Monforte del Cid. At this point a segment branch heads towards Alicante, while the main section heads towards Murcia and Cartagena.

Section details for the Spanish railway

The Torrejon de Velasco – Motilla del Palancar section is the first section stretching 223.6km. It runs through the territories of Madrid, Toledo and Cuenca and Motilla del Palancar, joining the Albacete and Valencia section. It was opened in December 2010.

Motilla del Palancar – Albacete section is the most complex section as it crosses the Jucar River. It heads towards the city of Albacete after crossing the river.

Xátiva – Silla Valencia section is a 59km long stretch along the Mediterranean Corridor parallel to the already existing conventional track. The Valencia – Castellon section stretches 55km and will reduce travel times between the two cities by 25 minutes.

The 119km long La Encina – Alicante section will run from Encina bypass to Monforte del Cid, where it will branch in to two. One of the branches will head towards Alicante and the other towards Elche, Orihuela and the region of Murcia.

Monforte Del Cid – Murcia / Cartagena section currently operates on Iberian gauge trains until the arrival of high speed trains. It has an approximate length of 8.9km.

Renfe AVE Class Talgo 350 trains are planned to be used on the high speed lines. The train is aerodynamically designed so as to make it comfortably pass through large tunnels at high speeds. The Talgo 350 trains can run at speeds exceeding 300kmph.

Infrastructure of the Madrid-Levante line

Spain’s capital Madrid, home to over three million people, has one of the most extensive metro systems anywhere in the world.

It also includes a 3.1km long Del Bosque tunnel through the Cuenca mountain range. A station at Cuenca is also planned for this section.

Albacete station is being renovated for making it compatible with the high speed rail operation on the Motilla del Palancar – Albacete section. This station will also serve the line that connects to Alicante and Murcia.

The Motilla Del Palancar – Valencia section includes 25km of tunnels, 11km of viaducts and a station near Requena and Utiel. It also has a 261m long viaduct on the Contreras reservoir. Other viaducts are over the Margo river and A3 road. The line passes through the 7.25km long Cabrera tunnel in the Sierra de la Cabrera mountain ranges.

Adif, in association with IT firm Indra, will install Da Vinci control system on the high speed line. The system will implement centralised traffic control, landline and GSM-R communications, signage, energy remote control and video surveillance, and will manage and regulate rail traffic.

Having first sanctioned a 160km/h (100mph) maximum speed as recently as 1986, Spain moved quickly to get high-speed rail into operation. It remains committed to long-term plans for the new network.