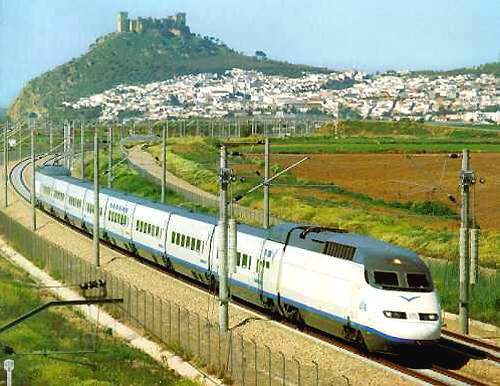 Having first sanctioned a 160km/h (100mph) maximum speed as recently as 1986, Spain moved quickly to get high-speed rail into operation. It remains committed to long-term plans for the new network.

A large country that is sparsely populated in much of the interior, the government intends that all provincial cities will be less than four hours travelling time from the capital, Madrid, and six and a half hours from the second city and economic giant, Barcelona.

Not an obvious terminus for the first prestigious AVE (Alta Velocidad Española – used to denote long-distance high-speed services) link with the capital, the choice was prompted by fourth-largest city Sevilla being chosen to host the 1992 Expo world fair and to stimulate the economy of the country’s south in general. It was not to be until 2008 that 1992 Olympics host Barcelona would gain the AVE link with Madrid.

The 417km (259 mile) Madrid-Sevilla AVE was a great success, with high loadings on both dedicated TGV-based trains and locomotive-hauled Talgo services. The latter can operate to destinations away from the 1,435mm AVE line by using gauge changers to alter the width of the wheels to and from the Iberian standard of 1,668mm.

From the outset, adopting 1,435mm gauge rather than the Iberian standard signalled intent for connection with the wider rail network, part of Spain’s modern enthusiasm for European involvement. It also made possible the adoption of existing products from established suppliers in the field of high-speed rail.

In 2003 the Madrid-Zaragoza-Lleida section opened, part of two key objectives for AVE operation: connecting Madrid and Barcelona, and the onwards link to the French LGV network. Operated under the medium-distance AVANT format, a 21km branch from the Sevilla line brought Toledo onto the network in 2005.

“The Madrid-Sevilla AVE was a great success, with high loadings on both dedicated TGV-based trains and locomotive-hauled Talgo services.”

The first branching towards the north-west, 180km from Madrid to Valladolid, opened in December 2007. This was immediately followed by a 55km addition in the south to Malaga, completing the Madrid connection and causing announcement in early 2008 of a scaling back of air services.

In November a breakthrough was made on the 8.2km Pertús (Perthus) tunnel workings beneath the eastern Pyrenees, part of the project for a new 44.5km line from Figueras, Spain, to Perpignan, France, that will cut two hours from current Barcelona-Toulouse timings. Resulting from a 50-year contract between the French and Spanish governments and the special-purpose vehicle company T.P. Ferro, the line is Europe’s second privately financed international rail link (after the Channel Tunnel).

In January 2005 under the Rail Sector Act, the splitting of train operation from infrastructure came into force, with Ministry of Public Works body ADIF taking on the infrastructure aspect. Spanish rail infrastructure development up to 2020, including the high-speed lines, is contained in the Government’s Plan Estratégico de Infraestructuras y Transporte – PEIT.

Aside from greatly increased speeds compared to the notoriously winding 1,668mm system, the new lines have taken more direct alignments and have reduced rail distances between the major centres. As with the switch of gauge, the high-speed line project involved equipping with the more mainstream 25kV ac, as opposed to the domestic 3,000V dc.

In 2001 RENFE projected that by 2007 a mixed fleet would be needed for high-speed lines: 146 with 300–350km/h capability, 86 for regional use at 250–270km/h and 50 for variable gauge operations. Unusual in European high-speed rail, Renfe’s AVE deploys rolling stock derived from both major sources, the French Alstom TGV (designated S-100) being used at the outset, and subsequently Siemens Velaro ICE-based equipment (S-103) from Germany.

“Aside from greatly increased speeds, the new lines have taken more direct alignments and reduced rail distances between the major centres.”

Adding to the mix is Bombardier working with domestic supplier CAF with the S-102. To match the standards of later types, the original S-100 fleet has been subject to a refurbishment programme.

Being deployed on Madrid-Barcelona services, the Siemens eight-car Velaro E S-103 seats 404 passengers and is a reworked German ICE-3. In September 2006 a Velaro-E set the record for a production series train in Spain of 404km/h (251mph). Siemens Mobility is supplying 26 trains S-103 under a contract which includes a 14-year maintenance agreement.

The Talgo 350/S-102 follow the design of the successful 2001 prototype and are in 12-car formations with 318 first class and Turista (standard) seats and a bar / buffet. The builder also secured a 14-year maintenance sharing contract.

A €655m order for 30 more S-102 330km/h high-speed trains was announced in January 2006 for Talgo/Bombardier were delivered between 2008 and 2010, bringing the total to 46. The ‘duck bill’ styled power cars are being built with Bombardier’s MITRAC 3000 propulsion system with traction auxiliary converter and drive system and very high-speed bogies.

German technology is at the heart of the operational control system. A cab signalling system is coupled with a continuous speed control facility. Siemens supplied an ISDN communications system which transmits speech, data, text and images. This proved a success on the Madrid-Seville route and it was adopted as a standard for subsequent routes to Barcelona and Narbonne across the French border.

Because of its use of existing lines, conventional signalling was retained between Barcelona, Valencia and Alicante. In 2006 ETCS/ERTMS Level 1 system was introduced.

A signalling contract was awarded to a consortium of Alcatel, Dimetronic and Siemens for the Madrid-Segovia and Valdestillas-Valladolid sections of the Madrid-Valladolid line. Worth €151.1m, the contract includes GSM-R and a traffic control centre.

Benefiting from its total segregation from the older Spanish network, the AVE is established as Europe’s most punctual rail service at very close to 100% on-time arrivals. However, problems with some newly installed signalling equipment led to delays and penalty payments being made. A sliding scale of penalties that varies by line for the operators is applicable, with a 100% refund payable if delays exceed 30 minutes.

The future of the network

Following much delay including technical and legal challenges connected with passage through the city, Barcelona Sants became linked with Madrid Atocha with a 630km (391 mile) high-speed rail link in February 2008.

With centre-to-centre timings as low as 2h 38min, and with keen prices (down to €162 return) on an initial daily schedule of 18 services each way, AVE is likely to a have a damaging effect on one the world’s most intensively worked air routes.

“The first connection for Spanish AVE and French TGV high-speed brands opened in 2009. Two further lines are expected to become operational in 2012.”

The first connection for Spanish AVE and French TGV high-speed brands opened in 2009. Two further lines, connecting Barcelona to Figueres and Figueres to Perpignan, are expected to become operational in 2012.

With a continuing aim to create Europe’s largest high-speed rail network, other future high-speed lines include to the northern and north-west Atlantic coasts, plus more direct routes to the Mediterranean as well as some non-radial routes along more populous areas of the coastlines.

Comments by the Portuguese Prime Minister indicate that the long-anticipated Madrid-Lisbon line may open by 2013.

The possibility of a southern rail link to North Africa seems to be gaining substance. A joint committee is working on aspects of a project for a 39km tunnel between Punta Palomas (near the projected Spanish high-speed extension to Algeciras) to Punta Malabata in Morocco, a country which has a 1,435mm high-speed rail system under development.

Voith Turbo
Voith Turbo, a group division of Voith, is a specialist...