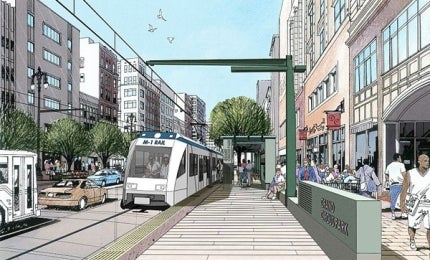 The project was developed by M-1 RAIL, a non-profit organisation established in 2007 that is in charge of the design, construction and future operations of the project.

The system was opened to public in May 2017 and is expected to carry up to 8,000 passengers a day. It is the first major public private collaboration transit project led and funded by private businesses and philanthropic organisations in partnership with local government, the State of Michigan and the US Department of Transportation.

Details of the stations

"The project was developed by M-1 RAIL, a non-profit organisation established in 2007."

The North End has the streetcar system running along centrally whereas only the Congress Station is located along the median of the Woodward Avenue. The streetcar runs along the curbside at Midtown District.

The Woodward Avenue Streetcar consists of two to three cars, which are sleek and run on rails. Each 76,000lb car measures 73ft-long, 8.5ft-wide, and 13ft-high. The cars have a double-ended, double-sided configuration with operating controls at both ends and three doors on either side of the car.

The vehicles feature regenerative braking and travel in mixed traffic at the same speed of vehicular road traffic.

The vehicles are powered by lithium-ion battery packs, which enable them to run 60% off wire, with the exception between Henry and Canfield, where they run on wire. The off-wire technology ensures safety and allows for easy maintenance.

The streetcar system runs curb side for majority of its length because of the already existing retailing facilities along the route. Curb side running also ensures frequent and safe stops, as well as ample space for walking.

The route however changes into central running at the northern and southern ends of the system, which includes north of Burroughs Street.

Both the cars and the stations are Americans with Disabilities Act (ADA)-accessible, due to level boarding; 100% low-floor, indicative light; a sound system for doors; and manually operated doors.

The project costs approximately $140m, which includes the engineering, vehicle procurement and construction of the street car line and the vehicle maintenance facility.

The annual operation and maintenance cost of the system is estimated to be approximately $5.5m. M-1 RAIL is responsible for the operation of the streetcar system for ten years.

Construction started in July 2014 with positioning of traffic detour signage and erection of pedestrian fencing around the work zone. The construction work for 2014 was planned in three phases.

The first phase of the Atlanta Streetcar project is due to open in late-2014 in downtown Atlanta, Georgia, US.

The second phase of construction took place in the Midtown District starting from Sibley via Watson to Canfield. It then progressed to I-94 Bridge, around which primary work of Michigan Department of Transportation (MDOT) took place.

The third phase of construction was performed in the Downtown District. It started at the Campus Martius south and continued via Adams Street Woodward Avenue to Sibley Street where primary MDOT work took place around the I-75 Bridge.

The construction time required for the full completion of the project was approximately 27 months.

Stacy and Witbeck was selected as the construction manager for the project in July 2013. White Construction was chosen as a key local contractor.

Parsons Brinckerhoff was contracted for design, review and construction quality assurance services for the project in March 2014.

Transdev was chosen to handle day-to-day operations and maintenance services for the street car project.