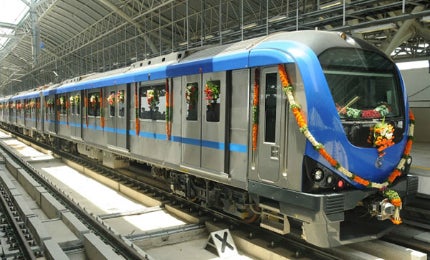 Lucknow Metro is a mass rapid transit system being constructed to provide the city of Lucknow in the state of Uttar Pradesh, India, an environment friendly and alternative means of transport.

Approximately 90% of the city’s registered vehicles are private.

A final detailed project report (DPR) for the Lucknow Metro was submitted to the Ministry of Urban Development (MoUD) in August 2013 and was approved in December. Construction on the project began in the second half of 2014.

"The north-south corridor will stretch from the Chaudhary Charan Singh (CCS) International Airport to Munshi Pulia for a total length of 22.87km."

The east-west corridor will stretch between the Lucknow Railway Station and Vasantkunj for a total length of 11.9km, of which 4.54km will be elevated and 6.55km will be underground. It will feature seven underground stations and five elevated stations.

The new metro line is designed to be a 1,435mm nominal gauge track with an axle load of 16t. The designed speed of the metro line is 80kmph, whereas scheduled speeds for the north-south and the east-west corridors are 34kmph and 32kmph respectively.

In addition, the project will also involve the construction of rail maintenance facilities at Transport Nagar for the north-south corridor and VasantKunj Depot for the east-west corridor.

Construction methods adopted for the project include building elevated viaducts using pre-stressed concrete box girders placed on a single pier with pile or open foundation, the use of a tunnel boring machine (TBM) or the New Austrian Tunnelling method (NATM) for underground sections, and cut-and-cover with top-down method for underground stations.

The current phase involves the construction of 8.5km of elevated viaduct and eight elevated stations on the north-south corridor.

The metro will supplement 1,676mm gauge operations which, like most of the Chennai-based Southern Railway division of Indian Railways, are mainly geared toward passenger activity.

The rolling stock for the project will comprise 20 Metropolis train sets, to be supplied by Alstom. The six-car train sets, equipped with amenities such as air-conditioning and a passenger information system, will be constructed at Alstom’s Sri City train manufacturing facility in Andhra Pradesh, South India.

The car body of the trains will be constructed of stainless steel and each train set will be capable of accommodating 1,574 passengers.

Alstom has been assigned the additional charge of providing signalling solutions for the project. Its sites in Bangalore, India, and Saint Ouen, France, will collaborate to supply the same solutions.

The metro line will be equipped with cab signalling and continuous automatic train control with a train protection (ATP) system, while telecommunications will comprise an integrated system with facilities such as fibre optic cable, supervisory control and data acquisition (SCADA).

It will also feature a train radio and several systems for public address (PA), train information, controlling telephones and a centralised clock.

Automated fare collection systems such as passenger operated machines (POM) and smart cards are proposed to be installed for the metro.

Contractors involved with the Lucknow Metro

The project’s DPR was prepared by Delhi Metro Rail Corporation. Larsen & Toubro (L&T) was awarded the construction contract (LKCC – 01) for the current phase in September 2014.

Estimated investment for the construction of the north-south corridor is Rs123.74bn ($1.9bn approximately). Half the cost will be met through a senior debt from multilateral / bilateral agencies, while the remaining will be funded by the GoI and the GoUP.