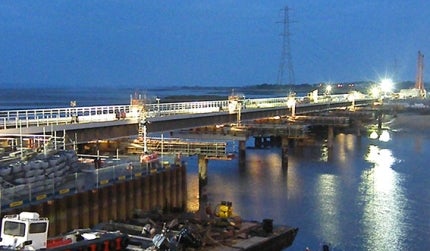 The viaduct replacement was part of a larger package that included redoubling the 5.25-mile line between Gowerton and Llanelli, and other infrastructure developments at Gowerton station.

"The route was a bottleneck to train services as there was just a single line."

The Loughor viaduct replacement project was among several rail enhancement initiatives undertaken in South and West Wales, for improving the economic growth of the region.

Redoubling the Gowerton-Llanelli line included the construction of a new track on the viaduct, and was completed in April 2013. The route was a bottleneck to train services as there was just a single line.

The number of trains to West Wales has risen after completion of the viaduct replacement and redoubling project. The project is expected to lead to a 20% increase in passengers using railway services of West Wales by 2020. Along with simplifying travel between West Wales and several regions, the project also boosts the job opportunities.

Background of the Loughor viaduct replacement

The 220m-long Loughor viaduct was built in 1852 and subsequently, it had been redesigned and strengthened as and when required. The last refurbishment of the viaduct was in the mid-1980s. Exhaustive surveys and investigations have revealed that the lifespan of the viaduct is about to end. Replacement of the entire structure, therefore, turned out to be the only available option.

Carillion, a construction services company based in the UK, was awarded the contract for the replacement of the Loughor Railway Viaduct. The company carried out both design and construction of the new viaduct, which is suitable for operating two railway lines.

The deck required for replacement of the viaduct was fabricated by Mabey Bridge. Approval from the Carmarthenshire Council was taken before start of the Loughor viaduct replacement work, as the viaduct is a grade two listed heritage structure.

The Northern Sydney Freight Corridor (NSFC) programme will upgrade the interstate rail network between Sydney and Newcastle. The major infrastructure programme is planned and structured to enhance the capacity and reliability of the freight train network and passenger services on the Main North Line.

The viaduct replacement and line redoubling project has cleared the way to run two more trains between Llanelli and Swansea for every hour, and also an extra train on the Swansea-Carmarthen route on an hourly basis.

Arriva Trains Wales, a UK-based train operator providing services to all stations of Wales, stated that it could now provide roughly another 14 services passing through Gowerton, everyday.

The train service between Swansea and Cardiff now extends up to Llanelli. In addition, the project allowed for adding a new service on the Swansea-Cardiff route.

Construction details and contractors involved with the track redoubling works

The contract for the track redoubling work between Gowerton and Llanelli was awarded to a joint venture of Morgan Sindall and Coals Rail.

"The project involved the construction of a new bridge, which replaces the existing timber trestle Loughor Viaduct."

The railway line connecting Swansea and Llanelli was closed for a 16-day period for facilitating speedy completion of last leg of redoubling. The closure enabled the engineers in quickly completing both the redoubling and construction of a new footbridge and platform at Gowerton Station.

The use of the east-bound platform of the station resumed subsequent to completion of the project. The platform is now equipped with signage, new lighting and CCTV.

Upgrade of Duffryn level crossing was also carried out as part of the contract. Sophisticated crossing equipment and signalling systems have been deployed at the crossing.