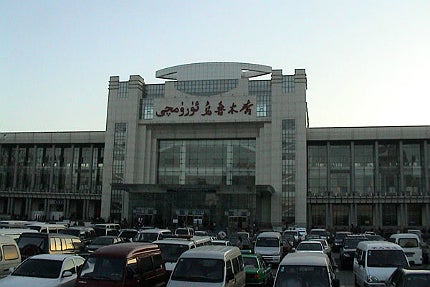 It is the first long-distance high-speed line in West China connecting Lanzhou, the capital city of Gansu Province, with Urumqi, the capital of the Xinjiang Autonomous Region in north-west China.

Lanxin is a double-track line running parallel to the existing Lanxin Passenger Railway. The construction of the line started in November 2009 and was completed in the second half of 2014. The line was opened for passengers in December 2014. The estimated investment for the project is more than CNY43bn ($23bn).

"It is the first long-distance high-speed line in West China connecting Lanzhou, the capital city of Gansu Province, with Urumqi."

The existing Lanxin Railway is a 1,903km-long passenger line connecting Urumqi with Lanzhou. It forms part of the Second Eurasian Continental Bridge or the New Silk Route that extends from eastern China to Rotterdam in the Netherlands. The initial phase of the passenger line was opened in 1966. The line was extended for link-up with the Kazakhstan Railroads in 1990.

The whole Lanxin Railway is now double-tracked with the completion of the 21km Wushaoling Tunnel in the Gansu Province in 2006. The line achieved full electrification in 2013.

A new high-speed line was planned along the route to connect Xinjiang with the rest of China’s high-speed rail network. The Lanxin high-speed line, or the second Lanxin line, was approved by China’s National Development and Reform Commission in August 2009. The construction of the new line officially started three months later.

The high-speed line allows the existing Lanxin Railway to serve exclusively as a freight line.

Route of the Chinese high-speed rail line and construction

The Lanxin high-speed line passes through three Chinese provinces, including 795km in Gansu, 268km in Qinghai and 713km in Xinjiang, unlike the existing Lanxin railway that runs only in Gansu and Xinjiang.

The high-speed line is routed to Qinghai Province from Lanzhou after which it runs in a north-west direction across the Qilian Mountains to connect the Hexi Corridor at Zhangye in the Gansu Province.

The high-speed line passes via Hami and Turpan in the Xinjiang province before it terminates at Urumqi.

The rail tracks of the Lanxin high-speed line near Qilianshan Tunnel were laid at a height of 3,858m (12,657ft) above sea level. It makes Lanxin the world’s highest high-speed rail track.

A 67km-long wind-prevent channel was built near Shanshan as the high-speed line traverses through the 100-li wind region of the Gobi Desert. A train on the Lanxin Railway was overturned by strong winds in this region in 2007.

The entire high-speed line is built with double-block ballast-less track.

The high-speed line has 31 stations in total. The line is designed to be operated with trains running at speeds up to 300km/h. The new line reduced the travel time between Lanzhou and Urumqi to approximately six hours.

The high-speed line is connected to the 832km Chongqing-Lanzhou (Lanyu) railway project passing via Nanchong and Guangyuan.

Scheduled for completion in 2017, the Xulan high-speed line will be well connected with cities such as Beijing and Shanghai. The travel time from Beijing to Urumqi will be reduced to less than 12 hours when both lines are completed.