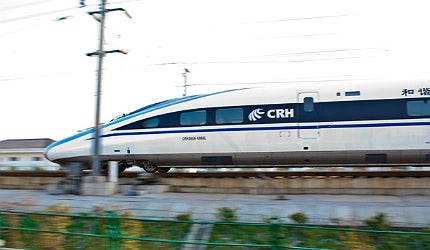 CRH380A is high speed rolling stock which was developed by the China South Locomotive & Rolling Stock Corporation (CSR). It is one among the four train models designed to be operated at speeds of 380kmph on the newly built Chinese high speed lines.

It is the world record holder in the fastest train category, hitting a speed of 486.1kmph on the world’s longest high speed line in China.

It was planned that a new generation high speed train would be developed which could continuously operate at a speed of 350kmph. The project was included in the 11th Five Year Plan. The train sets were built and put into tests by early 2010.

Design of the Chinese CRH380 train

The design work was carried out in four main categories: schematic drawing, technological planning, structuring and building and experimentation. Based on the analysis, an optimised sub system design was put forward. More than 20 designs were shortlisted and were sent for further optimisation and simulation. Around 1,000 technical tests in 17 specific areas, such as dynamic performance, pantograph, aerodynamic and traction performance, were conducted.

The technology to increase the maximum speed of the train was discovered through research carried out at various universities of China and was fed into the CSR’s design.

The body is integrally welded with aluminium alloy and is shaped with a fish head-like structure in the front. The rotating paraboloid wedge structure cuts down aerodynamic resistance and mean energy consumption throughout the runtime. It also increases the amount of regenerated energy.

The new generation high speed electric multiple unit uses the electro pneumatic compound brake mode in which the train will use most of the regenerative braking energy. In the mean time the traction motor will convert the energy into required power by means of a power generator. As a result of this the maximum power of the train increases by 50%, which helps in terms of exceptional energy saving.

The train is designed to be completely vibration free. The train bogies are designed to be safe and reliable. They can withstand and run through a critical speed of 550kmph. They are also incorporated with an advanced noise control technology by using new sound absorbing and insulating materials in the construction.

The new generation train set comprises of various lounges and deluxe six seat compartments. It has a separate dining car called the Bistro Bar where snacks and selected meals are served. There are also separate bar counters where passengers can have a drink if they wish to.

"It is being manufactured by CSR Qingdao Sifang Locomotive & Rolling Stock."

Each seat in the train is equipped with a display, dashboard, reading lamp and power port. Rotating seats are installed throughout the compartment.

Special facilities are provided for disabled people. One disabled toilet per compartment is installed with facilities such as an automatic door with on-off button, barrier free wheel car passage, handrail for the disabled and infant care table.

Orders and deliveries of CSR’s trains

CSR was awarded a contract worth $215.77m by Hong Kong-based MTR to supply the CRH380A train sets to operate on the Guangzhou-Shenzhen-Hong Kong express rail link which is expected to be functional by 2015. The train sets will be customised according to MTR requirements.