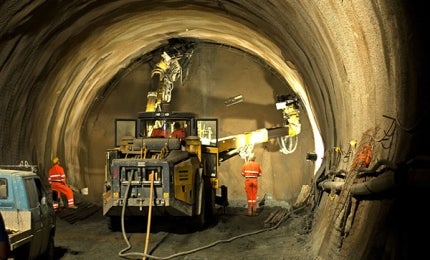 The Koralm high-speed rail project is currently underway in south-east Austria by ÖBB Infrastruktur. It is part of the 2,400km trans-European Baltic-Adriatic Corridor that stretches from Gdansk and Gdynia on the northern coast of Poland to Bologna and Ravenna in northern Italy via Warsaw and Vienna, linking the Baltic and Adriatic seas.

The Koralm line will directly link Klagenfurt and Graz, the respective capital cities of Austrian states Carinthia and Styria, while reducing the travel time between the cities from three hours to less than an hour. The project is estimated to cost €11bn ($13.8bn) and includes 130km of double-track electrified line, 12 stations and stops, as well as a 32.9km-long tunnel, the longest railway tunnel of Austria.

Expected to be operational by 2023, the rail line will carry up to 256 high-speed trains a day running at a maximum speed of 250km/h. More than 100,000 jobs are expected to be created during the construction phases and roughly 40,000 jobs during operation.

The Koralm railway route begins south of Graz and runs parallel to the historic Southern Railway Line until Werndorf after which, it passes through Hengsberg and the Lassnitz Valley through a tunnel towards Deutschlandsberg.

“The Koralm line will directly link Klagenfurt and Graz, the respective capital cities of Austrian states Carinthia and Styria, while reducing the travel time between the cities from three hours to less than an hour.”

The double-track line then crosses the River Drau at Aich and curves westwards to pass by the Klopeiner See lake at a distance of 2km before crossing the River Drau again near Grafenstein. The line finally joins the existing railway line towards Klagenfurt.

The 32.9km Koralm tunnel underpassing the Koralpe mountain range between the provinces of Carinthia and Styria forms the central section of the Koralm railway line.

The double-tube Austrian rail tunnel will consist of two parallel monodirectional single-track tunnels interconnected by cross-passages every 500m. There will also be an 830m-long emergency station in the middle of the tunnel. The maximum overburden of the tunnel will be 1,250m.

Before the main excavation for the tunnel, 130 exploration wells and a 10km-long exploratory tunnel system were excavated to carry out in-depth analysis of the geological and hydrogeological conditions.

The tunnel construction is divided into three main sections: KAT1, KAT2 and KAT3. The KAT1 constitutes the east entrance of the tunnel in Styria and includes a 3.2km open land route, four bridges and a 2.3km tunnel section built by drilling and blasting using the New Austrian Tunnel Method (NATM) or Sequential Excavation Method (SEM). Construction of this section began at the end of 2008 and was completed in October 2013.

Construction of the KAT2, the middle and longest section with an approximate length of 19km, began in January 2011. Two single-track main tubes, namely the North and South tubes, are being built using two 9.9m hard rock Doubleshield TBMs. The tubes will be connected by cross passages every 500m. Scheduled for completion in 2019, the KAT2 section also involves a 900m-long underground emergency station in the central part of the tunnel.

The KAT3 involves widening of the existing 7.6km-long sounding tunnel and building an additional 3.3km of new tunnel for the South Tube. The 12.6km-long North tube will also be drilled using a TBM. Construction on this section began in 2014 and is expected to continue through 2020.

Construction of the high-speed railway project began in 1999 after four years of planning. In December 2002, construction started on the upgrading of the 7km long four-track section between Graz main and Feldkirchen stations to meet high-speed rail standards, and was completed by 2005. A subsurface route was also elected to serve the Graz Airport station.

The section between Werndorf and Wettmannstätten, including a long underpass below the A9 Python Motorway and a 1.7km-long Hengsberg Tunnel, was constructed between 2006 and 2010, which opened as a single track, non-electrified railway in December 2010.

A 10km-long outdoor section was built to cross the Lassnitz Valley and house the future Weststeiermark station. The Koralm tunnel has been under construction since 2008.

Construction of the Granitztal tunnel chain, consisting of Grutschen tunnel (2.6km) and Langerberg tunnel (2.9km), will start in 2015 and is expected to end by 2019.

The 28.5km-long section between the Jauntal bridge and Althofen, which includes a 600m-long bridge crossing the River Drau, was built between November 2010 and November 2014. Construction of the Klagenfurt freight station began in March 2010 and was completed in late 2012.

A joint venture of Geoconsult, Bernard Ingenieure, Basler and Hoffmann, Lombardi, Ingenieurbüro Maidl and Werner Consult was selected as the design engineers for the project.

BGG Consult was contracted to provide geotechnical and hydrogeological services for the project. Germany-based iC Group provides vibrations, noise and air-quality measurement services during the construction of the Koralm rail line.

Royal BAM Group’s German subsidiary Wayss & Freytag Ingenieurbau, in association with Oestu-Stettin and Hinteregger, was responsible for constructing the KAT1 section. Agru provided its AgruFlex liners for this section to protect the tunnel from ground water.

Wayss & Freytag, Held & Francke and Habau were responsible for the construction of the Hengsberg Tunnel.

A joint venture of Strabag and Jäger Bau won a €570m ($706m) contract for the construction of the KAT2 section of the tunnel. Porr Group was awarded the €300m ($372m) contract to construct the KAT3 section.

Aker Wirth, a subsidiary of Aker Solutions, in association with Rowa Tunnelling Logistics, is the provider of two TBMs being used for the KAT2 section. CEMEX Austria will supply 540,000m³ of ready-mix concrete for the Koralm tunnel construction.