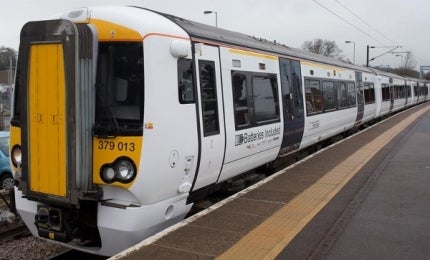 The train will run between Harwich International Station and Manningtree Station and will be operated by Abellio Greater Anglia. The test service will last for five weeks starting from 12 January 2015.

Features of the battery-powered train

"The prototype rail project is UK’s first modern battery-powered train and was established to demonstrate the potential of a battery / electric hybrid EMU in passenger service."

The battery-powered EMU can be used to fill gaps between electrified sections of the rail network and can run on branch lines where overhead electrification is expensive.

The cost-effective train is faster, quieter and more efficient than diesel-powered trains.

Funding for the IPEMU project

Network Rail is providing the majority of funding and is the delivery manager for the project. The Enabling Innovation Team (EIT), hosted by the Rail Safety and Standards Board, funded up to 30% of the technology demonstration. The UK Department for Transport is also co-funding the project through the FutureRailway innovation programme.

The IPEMU train is a modified version of the Class 379 Electrostar Electric Multiple-Unit, which is operated by Abellio Greater Anglia. The four-car trainset uses electricity drawn from a 25kV, 50Hz overhead power line.

The retrofitted, battery-powered Class 379 includes the DMOS, PTOSL (W) and DMOC cars, but the MOSL car was converted into a trailer battery car (BOS).

The motor converter module, CET tank and power bogie were removed and the toilet was locked out. The auxiliary reservoir was relocated to the DMOS and six battery rafts were installed by Bombardier’s Derby facility. The pipework and cabling were also reconfigured due to relocation of equipments.

Other modifications include the addition of two new power cables, a trailer bogie, a new button on the cab desk, an HMI screen and data acquisition instrumentation.

The train was successfully tested with two types of batteries, lithium iron magnesium phosphate and hot sodium nickel salt. IPEMU was, however, retrofitted with the lithium iron magnesium phosphate battery technology developed by battery supplier Valence at their lab in Texas, US. It was the first technology to meet the requirements of the project.

Bombardier OMNEO is a new electric multiple unit (EMU) double-deck train, that was unveiled in September 2013 by SCNF.

On-track trails of the EMU

Bombardier conducted on-track trial runs of the Abellio Greater Anglia Class 379 train with lithium iron magnesium batteries at a test track in Derby after the retrofitting in August 2014. This was followed by a series of high-speed tests at Network Rail’s Rail Innovation and Development Centre (RIDC) in Nottinghamshire.

The batteries were tested under live conditions similar to those in the potential rail routes in Anglia. The tests included intensive branch line round trips with eight hours of continuous running, extreme performance (high-speed) test, an extreme range test and an extreme temperature test.

Other types of battery technologies are also being tested at the Bombardier Mannheim facility in Germany.

The data collected from the trial passenger service will be used to help determine the viability of IPEMU, either as a straight battery unit or a hybrid one, and could lead to a fleet of battery-powered trains running on the UK’s rail network.

The future IPEMUs will not be adapted units but will be newly designed trains in order to decrease the energy consumption. They are expected to increase electric mileage with less infrastructure cost and zero emissions.

The eco-friendly battery-powered train will contribute to Network Rail’s target of reducing the cost of running Britain’s railway system by 20% over the next five years.